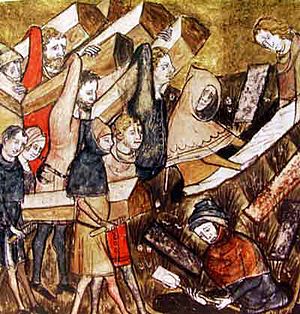 The burial of the victims of the plague in Tournai. Fragment of a miniature from "The Chronicles of Gilles Li Muisis" (1272-1352), abbot of the monastery of St. Martin of the Righteous. Bibliothèque royale de Belgique, MS 13076-77, f. 24v.

A pandemic (from Greek παν pan all + δήμος demos people) is an epidemic (an outbreak of an infectious disease) that spreads across a large region (for example a continent), or even worldwide.

According to the World Health Organization, a pandemic can start when three conditions have been met:

A disease or condition is not a pandemic merely because it is widespread or kills many people; it must also be infectious. For example cancer is responsible for many deaths but is not considered a pandemic because the disease is not infectious (although certain causes of some types of cancer might be).

The World Health Organization (WHO) has developed a plan to prepare globally the fight against influenza. It defines the stages of a pandemic and makes recommendations for national measures before and during a pandemic. The phases are:

All content from Kiddle encyclopedia articles (including the article images and facts) can be freely used under Attribution-ShareAlike license, unless stated otherwise. Cite this article:
Pandemic Facts for Kids. Kiddle Encyclopedia.