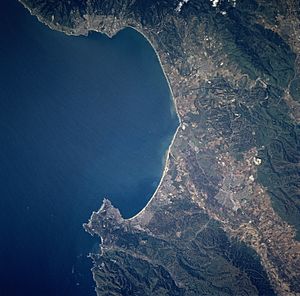 The Monterey Bay, as seen from space, stretches from Santa Cruz in the north to the Monterey Peninsula in the south 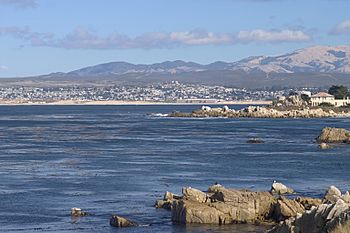 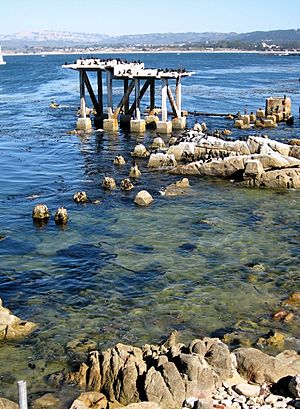 Monterey Bay is a bay of the Pacific Ocean located on the coast of the U.S. state of California. The bay is south of the major cities of San Francisco and San Jose. The county-seat city of Santa Cruz is located at the north end of the bay. The city of Monterey is on the Monterey Peninsula at the south end. The Monterey Bay Area is a local colloquialism sometimes used to describe the whole of the Central Coast communities of Santa Cruz and Monterey counties.

The first European to discover Monterey Bay was Juan Rodríguez Cabrillo on November 16, 1542 while sailing northward along the coast on a Spanish naval expedition. He named the bay Bahía de los Pinos, probably because of the forest of pine trees first encountered while rounding the peninsula at the southern end of the bay. Cabrillo's name for the bay was lost, but the westernmost point of the peninsula is still known as Point Pinos.

The present name for the bay was documented in 1602 by Sebastián Vizcaíno, who had been tasked by the Spanish government to complete a detailed chart of the coast. He anchored in what is now the Monterey harbor on December 16, and named it Puerto de Monterrey, in honor of the Conde de Monterrey, then viceroy of New Spain. Monterrey is an alternate spelling of Monterrei, a municipality in the Galicia region of Spain from which the viceroy and his father (the Fourth Count of Monterrei) originated.

The Monterey Canyon, one of the largest underwater canyons in the world, begins off the coast of Moss Landing, exactly in the center of Monterey Bay.

Monterey Bay is home to many species of marine mammals, including sea otters, harbor seals, and bottlenose dolphins; as well as being on the migratory path of Gray and Humpback Whales and a breeding site for elephant seals. Killer whales are also found along the coast, especially when Gray whales migrate, as they hunt the whales during their migration north. Many species of fish, sharks, mollusks such as abalone and squid, birds, and sea turtles also live in the bay. Several varieties of kelp grow in the bay, some becoming as tall as trees, forming what is known as a kelp forest. 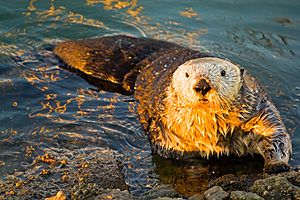 Clockwise around the bay, generally from north to south. Inland communities are indented:

All content from Kiddle encyclopedia articles (including the article images and facts) can be freely used under Attribution-ShareAlike license, unless stated otherwise. Cite this article:
Monterey Bay Facts for Kids. Kiddle Encyclopedia.