Capitola is a city in Santa Cruz County, California, United States, on the coast of Monterey Bay. The population was 9,918 at the 2010 census. 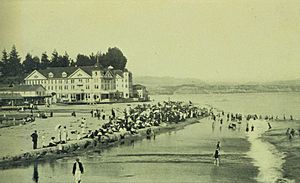 The original settlement now known as Capitola grew out of what was then called Soquel Landing. Soquel Landing got its name from a wharf located at the mouth of Soquel Creek. This wharf, which dates back to the 1850s, served as an outlet for the produce and lumber grown in the interior. In 1865, Captain John Pope Davenport, a whaleman at Monterey, moved his operations to be near the wharf. Unable to capture any whales, he moved his operations the following year to Point Año Nuevo.

In 1869, Frederick A. Hihn, who owned the property in the vicinity of the wharf, decided to develop it as a seaside resort. At first he leased the area to Samuel A. Hall and the area became known as Camp Capitola. Most authorities believe that it was Hihn who chose the name of Capitola, but they are unsure as to why he did so. Several possibilities have been asserted, one being that it was named for the heroine of The Hidden Hand, a novel by the popular author E.D.E.N. Southworth, favored by Hall's daughter Lulu. Capitola is known as the oldest beach resort on the West Coast.

Capitola is a popular tourist town because of its trendy shops and restaurants on the shore directly connecting to a fishing wharf and its large, sandy beach. 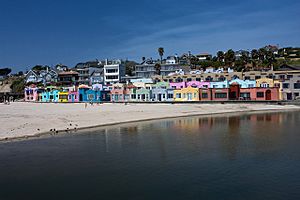 Capitola sits on the northeast shore of Monterey Bay. Steep cliffs mark access to several popular beaches, including New Brighton Beach, or drop directly to the rocky shoreline of the bay. Downtown Capitola sits in a depression among the cliffs so that the popular tourist and shopping area leads directly to Capitola Beach. Colorful houses and hotels line the slopes of the town leading back up to the clifftops.

There have been a number of historic fuel releases to the soil in Capitola; among these the following locations have been identified by the County of Santa Cruz or the California Regional Water Quality Control Board: 819 Bay Avenue, 1649 41st Avenue, 2210 41st Avenue and 1700 41st Avenue.

The historic Venetian Court (shown in photo to the right) that sits on the beach just east of the pier is on the Register of National Historic Places as "The first Condominium Beach Community in the United States, built in 1924".

Capitola has mild weather throughout the year, enjoying a Mediterranean climate (Köppen Csb) characterized by cool, wet winters and warm, mostly dry summers. Due to its proximity to Monterey Bay, fog and low overcast are common during the night and morning hours, especially in the summer.

There were 4,692 households out of which 22.6% had children under the age of 18 living with them, 33.1% were married couples living together, 11.1% had a female householder with no husband present, and 51.4% were non-families. 37.0% of all households were made up of individuals and 12.7% had someone living alone who was 65 years of age or older. The average household size was 2.11 and the average family size was 2.79.

In the summer of 1961 hundreds of birds attacked the town. Most of the birds were sooty shearwaters, a normally non-aggressive species that rarely comes to shore. Alfred Hitchcock was a regular visitor to nearby Santa Cruz and read about this episode. He went on to direct a film—The Birds—based on the idea of hundreds of birds attacking humans. The reason for this attack remained unknown for over 25 years until it was discovered that the birds had been affected by domoic acid, a toxin produced by red algae.

The Capitola Classic was a skateboarding event held in Capitola village in the late 1970s and early 1980s. Starting in 2009 efforts were made to revive the event.

On March 24, 2011, a drainage pipe burst following heavy rains, sending a surge of water through the historic village area. A mobile home park and many businesses suffered damage. Two days later cleanup operations were interrupted when the area was flooded again.

All content from Kiddle encyclopedia articles (including the article images and facts) can be freely used under Attribution-ShareAlike license, unless stated otherwise. Cite this article:
Capitola, California Facts for Kids. Kiddle Encyclopedia.