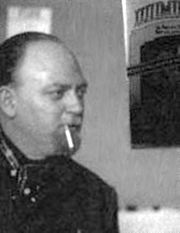 Wilson was the author of the Schrödinger's Cat trilogy (1979). He also co-wrote (with Robert Shea) the Illuminatus! trilogy (1975), which took a humorous look at the American fear of conspiracies. These books mix true facts with fiction.

In The Cosmic Trigger (1976), he introduced Discordianism, Sufism, futurism, the Illuminati and other unusual subjects to the general public. He also worked with Timothy Leary to promote futurist ideas of space migration, life extension, and intelligence enhancement.

Other fiction books by Wilson include The Earth Will Shake (1982) and Reality Is What You Can Get Away With (1996). His non-fiction books include Quantum Psychology, The New Inquisition (1994), and other volumes of The Cosmic Trigger. He and Miriam Joan Hill co-wrote Everything Is Under Control: Conspiracies, Cults, and Cover-Ups (1998), an encyclopedia of conspiracy theories.

All content from Kiddle encyclopedia articles (including the article images and facts) can be freely used under Attribution-ShareAlike license, unless stated otherwise. Cite this article:
Robert Anton Wilson Facts for Kids. Kiddle Encyclopedia.