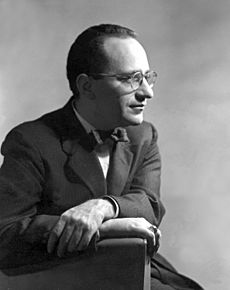 Murray Newton Rothbard (March 2, 1926 – January 7, 1995) was an American economist and writer. He helped make the Austrian School of economics popular in the United States.

Rothbard helped to create modern libertarianism, a political belief in less government and more personal freedom. He founded a form of free-market anarchism which he called "anarcho-capitalism". Rothbard believed society should organise itself, and he didn't like central planning.

Rothbard wrote over twenty books and was an important central figure in the American libertarian movement.

Rothbard advocated the abolition of government control of society and the economy. He considered the monopoly force of government the greatest danger to liberty and the long-term well-being of the people. He called the state a "gang of thieves writ large — the most immoral, grasping and unscrupulous individuals in any society".

Rothbard thought that all services provided by monopoly governments could be provided more efficiently by the private sector. According to him, many regulations and laws passed "for the public interest" were self-interested power grabs by scheming government bureaucrats to make themselves look important. These schemes were not subject to market disciplines.

Government services were not efficient, and would get eliminated, if the services could be provided by competition in the private sector.

Rothbard was equally condemning of big business working with government. Business elites, he thought, used government's monopoly power so as to influence laws and regulatory policy to help themselves at the expense of their competitive rivals.

He argued that taxation was theft on a grand scale, backed by law. It was "a compulsory monopoly of force" which prevented the more efficient voluntary procurement of defense and judicial services from competing suppliers. He also argued against central banking and fractional reserve banking. A monopoly system where the government decides how much money to print is, to him, a form of state-sponsored, legalized financial fraud. It is against libertarian principles and ethics. Rothbard opposed military, political, and economic interferences in the affairs of other nations.

All content from Kiddle encyclopedia articles (including the article images and facts) can be freely used under Attribution-ShareAlike license, unless stated otherwise. Cite this article:
Murray Rothbard Facts for Kids. Kiddle Encyclopedia.