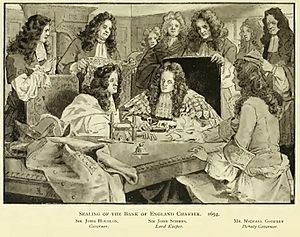 The sealing of the Bank of England Charter (1694).

Central banks usually oversee the commercial banks of their country. It issues the national currency, the nation's money. It controls the overall supply of money. In contrast to a commercial bank, a central bank can increase or decrease the amount of money in the nation.

The oldest central bank is the Bank of England. The largest banks are now the European Central Bank (ECB) and the Federal Reserve of the United States.

Central banks usually also have supervisory powers. These powers are meant to prevent bank runs, and to stop commercial banks and other financial institutions doing reckless or fraudulent things. The relation between central banks and governments varies from country to country.

The chief executive of a central bank is normally known as the Governor, President or Chairman. 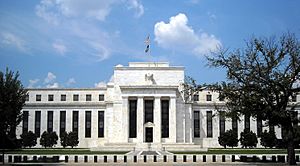 Functions of a central bank may include:

As of 2016, 75% of the world’s central-bank assets are controlled by four centers in China, the United States, Japan and the eurozone. The central banks of Brazil, Switzerland, Saudi Arabia, the U.K., India and Russia, each account for an average of 2.5 percent. The remaining 107 central banks hold less than 13 percent. According to data compiled by Bloomberg News, the top 10 largest central banks owned $21.4 trillion in assets, a 10 percent increase from 2015.

All content from Kiddle encyclopedia articles (including the article images and facts) can be freely used under Attribution-ShareAlike license, unless stated otherwise. Cite this article:
Central bank Facts for Kids. Kiddle Encyclopedia.