John Locke (29 August 1632 – 28 October 1704), known as the Father of Liberalism, was an English philosopher and physician. His writings influenced Voltaire and Rousseau, a lot of Scottish Enlightenment thinkers, as well as the American revolutionaries. He is mentioned in the American Declaration of Independence.

Locke's theories were usually about identity and the self. Locke thought that we are born without thoughts, and that knowledge is instead determined only by experience. 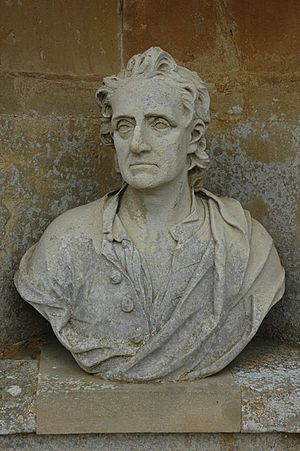 Locke's father, who was also named John Locke, was a country lawyer. He had served as a captain in the early part of the English Civil War. His mother, Agnes Keene, was a tanner's daughter and was thought to be very beautiful. Both mother and father were Puritans. Locke was born on 29 August 1632, in a cottage by the church in Wrington, Somerset, about twelve miles from Bristol. He was baptized when he was born. After that, his family soon moved to Pensford.

In 1647, Locke was sent to Westminster School in London. During this time he was being sponsored by Alexander Popham, a member of the Parliament. After finishing his studies there, he went into the Christ Church. Although Locke was a good student, he did not like the schedule of the time spent there. He did not like the classical subjects taught at the university, and wanted to learn more about modern philosophy. Through his friend Richard Lower, whom he had met at the school, Locke learned about medicine.

Locke was awarded a bachelor's degree in 1656 and a master's degree in 1658. In 1666, he met Lord Anthony Ashley Cooper, who had come to Oxford seeking treatment for his liver disease. Cooper was impressed with Locke and asked him to come.

Locke had been looking for a job and in 1667 moved into Shaftesbury's home at Exeter House in London, to serve as Lord Ashley's personal physician. In London, Locke continued his studies on medicine.

Locke's medical knowledge was put to the test when Shaftesbury's liver disease became worse until Shaftesbury was about to die. Locke used the advice of several physicians and persuaded Shaftesbury to go to an operation. Shaftesbury lived through the operation and thanked Locke for saving his life. 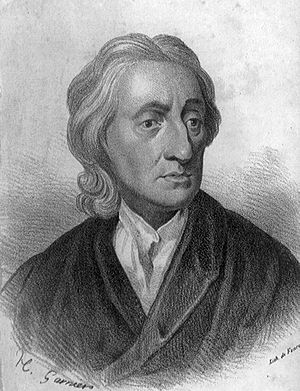 Locke's close friend Lady Masham invited him to join her at the Mashams' country house in Essex. Although his time there was marked by variable health from asthma attacks, he nevertheless became an intellectual hero of the Whigs. During this period he discussed matters with such figures as John Dryden and Isaac Newton.

He died in 28 October 1704, and is buried in the churchyard of the village of High Laver, east of Harlow in Essex, where he had lived in the household of Sir Francis Masham since 1691. Locke never married nor had children.

Events that happened during Locke's lifetime include the English Restoration, the Great Plague of London and the Great Fire of London. He did not quite see the Act of Union of 1707, though the thrones of England and Scotland were held in personal union throughout his lifetime. Constitutional monarchy and parliamentary democracy were in their infancy during Locke's time.

All content from Kiddle encyclopedia articles (including the article images and facts) can be freely used under Attribution-ShareAlike license, unless stated otherwise. Cite this article:
John Locke Facts for Kids. Kiddle Encyclopedia.