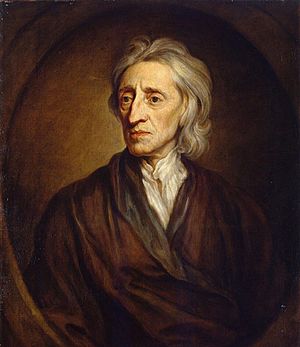 In philosophy, empiricism is a theory which believes that all knowledge comes from experience.

'Experience' is sometimes translated as 'sense data', i.e. we cannot know anything except by information which comes through our senses.

The British philosophers John Locke, George Berkeley and David Hume, clarified some of its basic ideas in the 17th and 18th century, building on the ideas of classical philosopher Aristotle.

Empiricism is one of several competing views about how we know things, part of the branch of philosophy called epistemology, or "study of knowledge". Materialism and physicalism share some of attitudes of empiricism.

All content from Kiddle encyclopedia articles (including the article images and facts) can be freely used under Attribution-ShareAlike license, unless stated otherwise. Cite this article:
Empiricism Facts for Kids. Kiddle Encyclopedia.