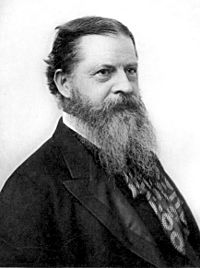 Charles Sanders Peirce ( purss; September 10, 1839 – April 19, 1914) was an American philosopher, logician, mathematician, and scientist. He is sometimes known as "the father of pragmatism". He was known for his works in logic, mathematics, philosophy, scientific methodology, and semiotics. Peirce was born in Cambridge, Massachusetts.

All content from Kiddle encyclopedia articles (including the article images and facts) can be freely used under Attribution-ShareAlike license, unless stated otherwise. Cite this article:
Charles Sanders Peirce Facts for Kids. Kiddle Encyclopedia.