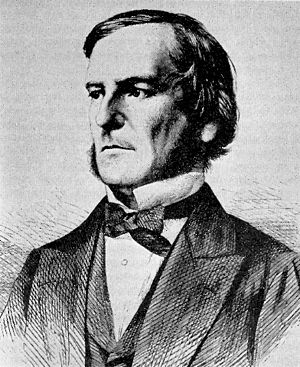 George Boole [], (November 2, 1815 – December 8, 1864) was an English mathematician and philosopher. He created Boolean algebra. This is one of the bases of modern-day computer science. Other people, like Augustus De Morgan and Charles Peirce, refined and completed his work. In their times, very few people knew of the work those mathematicians had done. Boolean algebra was rediscovered by Claude Shannon about 75 years after Boole's death. In his doctoral thesis, Shannon showed that boolean algebra was useful. It could simplify the design of electric switches and relays (like those that were used in the telephone switchboards of the time). Shannon also showed that such switches could solve boolean algebra problems. All modern-day digital circuits (mainly computers) use such algebra to solve problems.

All content from Kiddle encyclopedia articles (including the article images and facts) can be freely used under Attribution-ShareAlike license, unless stated otherwise. Cite this article:
George Boole Facts for Kids. Kiddle Encyclopedia.