Claude Elwood Shannon (April 30, 1916 – February 24, 2001) was an American mathematician, electrical engineer, and cryptographer known as "the father of information theory".

Shannon is noted for having founded information theory with a landmark paper, A Mathematical Theory of Communication, that he published in 1948. He is, perhaps, equally well known for founding digital circuit design theory in 1937.

Shannon showed an inclination towards mechanical and electrical things. His best subjects were science and mathematics. At home he constructed such devices as models of planes, a radio-controlled model boat and a barbed-wire telegraph system to a friend's house a half-mile away. While growing up, he also worked as a messenger for the Western Union company.

His childhood hero was Thomas Edison, who he later learned was a distant cousin. Both Shannon and Edison, were descendants of John Ogden (1609–1682), a colonial leader and an ancestor of many distinguished people.

Shannon then joined Bell Labs to work on fire-control systems and cryptography during World War II, with the National Defense Research Committee (NDRC).

For two months early in 1943, Shannon came into contact with the leading British mathematician Alan Turing. Turing had been posted to Washington to share with the U.S. Navy's cryptanalytic service the methods used by the British Government Code and Cypher School to break the ciphers used by the Kriegsmarine U-boats in the north Atlantic Ocean.

Shannon and Turing met at teatime in the cafeteria. Turing showed Shannon his 1936 paper that defined what is now known as the "Universal Turing machine"; this impressed Shannon, as many of its ideas complemented his own.

Shannon developed Alzheimer's disease and spent the last few years of his life in a nursing home in Massachusetts oblivious to the marvels of the digital revolution he had helped create. He died in 2001. He was survived by his wife, Mary Elizabeth Moore Shannon, his son, Andrew Moore Shannon, his daughter, Margarita Shannon, his sister, Catherine Shannon Kay, and his two granddaughters. His wife stated in his obituary that, had it not been for Alzheimer's disease, "He would have been bemused" by it all. 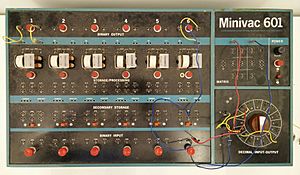 The Minivac 601, a digital computer trainer designed by Shannon.

Outside of his academic pursuits, Shannon was interested in juggling, unicycling, and chess. He also invented many devices, including a Roman numeral computer called THROBAC, juggling machines, and a flame-throwing trumpet. One of his more humorous devices was a box kept on his desk called the "Ultimate Machine", based on an idea by Marvin Minsky. Otherwise featureless, the box possessed a single switch on its side. When the switch was flipped, the lid of the box opened and a mechanical hand reached out, flipped off the switch, then retracted back inside the box. Renewed interest in the "Ultimate Machine" has emerged on YouTube and Thingiverse. In addition, he built a device that could solve the Rubik's Cube puzzle.

Shannon designed the Minivac 601, a digital computer trainer to teach business people about how computers functioned. It was sold by the Scientific Development Corp starting in 1961.

To commemorate Shannon's achievements, there were celebrations of his work in 2001.

There are currently six statues of Shannon sculpted by Eugene Daub. After the breakup of the Bell System, the part of Bell Labs that remained with AT&T Corporation was named Shannon Labs in his honor.

According to Neil Sloane, an AT&T Fellow who co-edited Shannon's large collection of papers in 1993, the perspective introduced by Shannon's communication theory (now called information theory) is the foundation of the digital revolution, and every device containing a microprocessor or microcontroller is a conceptual descendant of Shannon's publication in 1948: "He's one of the great men of the century. Without him, none of the things we know today would exist. The whole digital revolution started with him." The unit shannon is named after Claude Shannon.

A Mind at Play, a biography of Shannon written by Jimmy Soni and Rob Goodman, was published in 2017. 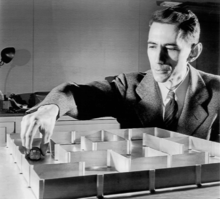 Shannon and his electromechanical mouse Theseus (named after Theseus from Greek mythology) which he tried to have solve the maze in one of the first experiments in artificial intelligence.

The Claude E. Shannon Award was established in his honor; he was also its first recipient, in 1972.

All content from Kiddle encyclopedia articles (including the article images and facts) can be freely used under Attribution-ShareAlike license, unless stated otherwise. Cite this article:
Claude Shannon Facts for Kids. Kiddle Encyclopedia.