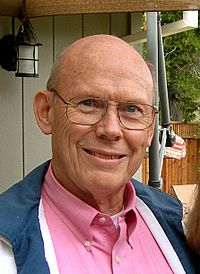 William Robert Sutherland (May 10, 1936 – February 18, 2020) was an American computer scientist. He served as manager of three notable research laboratories: Sun Microsystems Laboratories (1992–1998), the Systems Science Laboratory at Xerox PARC (1975–1981) and the Computer Science Division of Bolt Beranek and Newman Inc. which helped develop the ARPANET. In these roles, Sutherland took part in the creation of the personal computer, the technology of advanced microprocessors, the Smalltalk programming language, the Java programming language and the Internet.

Sutherland was born in Hastings, Nebraska. His father was from New Zealand and his mother was Scottish. Sutherland served in the United States Navy. He was the older brother of Ivan Sutherland.

All content from Kiddle encyclopedia articles (including the article images and facts) can be freely used under Attribution-ShareAlike license, unless stated otherwise. Cite this article:
Bert Sutherland Facts for Kids. Kiddle Encyclopedia.