Hastings is a city and the county seat of Adams County, Nebraska, United States. The population was 24,907 at the 2010 census. It is known as the town where Kool-Aid was invented by Edwin Perkins in 1927, and celebrates that event with the Kool-Aid Days festival every August. Hastings is also known for Fisher Fountain, and during World War II operated the largest Naval Ammunition Depot in the United States.

Hastings was founded in 1872 at the intersection of the Burlington and Missouri River Railroad and the St. Joseph and Denver City Railroad. It was named for Colonel D. T. Hastings of the St. Joseph and Grand Island Railroad, who was instrumental in building the railroad through Adams County. The area was previously open plain: the Donner party passed through on its way to California in 1846 and a pioneer cemetery marker in Hastings bears an inscription taken from Tamsen Donner's journal: "The country between the Blue and the Platte is beautiful beyond compare. Never have I seen so varied a country so suitable to cultivation." In the 1870s, railroads lured European immigrants to the new state of Nebraska with advertisements. Hastings' first settlers were English, from Liverpool, and were quickly joined by other English, Irish, Germans, Danes, and Germans from Russia.

Between 1872 and 1880, when the population had grown to 2,800, Hastings was a boomtown. Settlers first built sod houses, dugouts, and shanties, then houses and stores. The city was incorporated in April 1874, and in September 1878, after a five-year Great County Seat War, the county seat was transferred to Hastings from Juniata. However, a fire in 1879 destroyed 33 buildings downtown. The city was rebuilt between 1880 and 1890 in fireproof materials and in a more planned fashion, with characteristically ornate Victorian buildings, many designed by Charles C. Rittenhouse, the first practicing architect in Adams County and also mayor for ten years. Thanks to the railroads, the city enjoyed great prosperity during the Gilded Age. The population grew to 13,500. This period of expansion ended with the drought and agricultural depression of the 1890s; the town's population fell to 7,000 and would not reach 15,000 until 1930.

Hastings saw renewed growth from 1900 to 1930, which is reflected by buildings in the Craftsman, Prairie, Colonial Revival, and American Foursquare styles. The leading Arts and Crafts architect was Claude W. Way. Hastings had four brickyards and in 1911 was producing more bricks than any other city in Nebraska, and all the paving bricks. During this period, the city also became known as the cigar-making capital of Nebraska. The largest cigar factory, the Kipp Cigar Company, was by 1921 hand-rolling one-fifth of all cigars produced in Nebraska; in 1925 it produced half, a total of 10 million. Cigars lost their popularity to cigarettes between the two World Wars, and in the 1930s the Great Depression again brought the town's expansion to a halt. 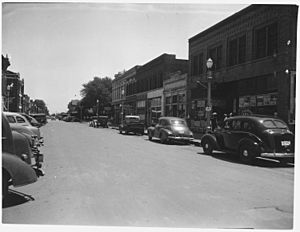 Looking east on First Street, circa 1944

In 1942, the Naval Ammunition Depot was constructed, initiating explosive growth: Hastings' population grew from 15,000 to 23,000 in under a year and there was a critical shortage of housing, which prompted both alteration of existing housing stock and rapid construction of new neighborhoods. Once World War II ended, staff was reduced at the ammunition depot, bringing Hastings' last growth period to an end in 1950, and the depot eventually closed.

Today, Heartwell Park and Central Hastings, two of the oldest neighborhoods, are listed on the National Register of Historic Places. The Hastings Symphony Orchestra performs in the Chautauqua Pavilion, built in 1907 and on the National Register of Historic Places, while the Hastings Community Theatre performs in the auditorium of the former Spencer Park School, built during the housing shortage of the 1940s. The city has adapted several of its historic buildings to new uses. Central Community College is housed in buildings of the former Naval Ammunition Depot., St. Michael's Elementary School, built in 1912, is now the police headquarters. The Clarke Hotel, built in 1914 and also on the National Register of Historic Places, is now the Kensington, a home for senior citizens. Spencer Park, an 840-unit "village" built to house workers in the 1940s, is now Good Samaritan Retirement Village.

Hastings is the principal city of the Hastings, Nebraska Micropolitan Statistical Area, which consists of Adams and Clay counties.

Amtrak, the national passenger rail system, provides service through Hastings, operating its California Zephyr daily in each direction between Chicago and Emeryville, California, across the bay from San Francisco. Hastings is served by major highways, including east-west U.S. Highways 6 and 34, and north-south U.S. Highway 281. Burlington Avenue is the main street running from south to north in Hastings; northward it leads to U.S. Highway 281. Hastings is about 14 miles (23 km) south of Interstate 80.

The Hastings Municipal Airport, owned and operated by the City of Hastings, serves the city. 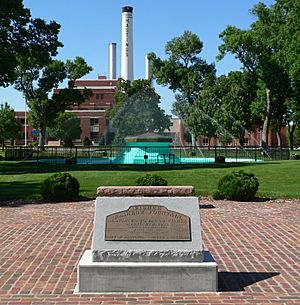 Fisher Rainbow Fountain; in the background is the Hastings Utilities complex

Fisher Fountain was originally a temporary exhibit at the 1932 Adams County Fair, called the Electric Fountain. It was invented by Edward R. Howard and became a symbol of hope during the Great Depression and Dust Bowl. Because of its popularity, it was moved to the park and made permanent. A competition among schoolchildren to rename it resulted in two winning names that were combined: Rainbow Fountain, and Fisher Fountain after Mayor Jacob Fisher.

Fisher Fountain was renovated in 1982 but was then dynamited by vandals in 1984. Its destruction aroused a strong community response. $63,000 was raised to rebuild it, and it was rededicated on Mother's Day in 1985.

The Hastings Museum of Natural and Cultural History is in an art deco building funded by $75,000 from the Works Progress Administration and completed in 1939. Albert Brooking, who founded the museum in 1926 and provided it with many exhibits, including Indian relics, fossils, and the largest private collection of mounted birds in the US, was buried in the basement in 1946. The museum currently houses the Lied Super Screen Theatre, McDonald Planetarium, and local and regional exhibits including the largest diorama of whooping and sandhill cranes in the world. The Adams County Historical Society is located within the museum.

The Naval Ammunition Depot, constructed on 49,000 acres (200 km2) southeast of Hastings and in operation from 1942 to 1946, was the largest United States World War II naval munitions plant, encompassing over 2,200 structures valued at $71 million. In 1945 it employed 6,692 civilians in addition to 125 officers and 1,800 enlistees. It was reactivated in the Korean War but decommissioned between 1958 and 1966, and the site now houses a US Department of Agriculture research station, training facilities for the National Guard and Reserves, an industrial park, Central Community College, and a golf course.

The school district is the Hastings Public Schools.

Hastings has several elementary schools. The largest public elementary is Longfellow. Others are Hawthorne, Watson, Alcott, and Lincoln. Zion Classical Academy serves students in grades Preschool–8. There was a new middle school that opened in the fall of 2008. The high schools are Hastings High School (public) Athletics Class B and St. Cecilia's (Catholic) Athletics class C–2.

Hastings College is a private liberal arts college, affiliated with the Presbyterian Church (USA), and founded in 1882. Central Community College, a two-year technical college, began serving students in 1966, and it occupies the site of the old Naval Ammunition Depot.

All content from Kiddle encyclopedia articles (including the article images and facts) can be freely used under Attribution-ShareAlike license, unless stated otherwise. Cite this article:
Hastings, Nebraska Facts for Kids. Kiddle Encyclopedia.