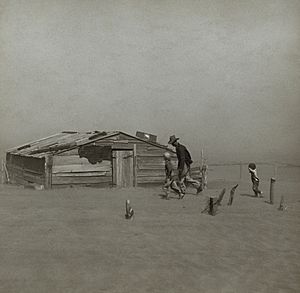 A farmer and his two sons during a dust storm; Cimarron County, Oklahoma, 1936.

The "Dust Bowl" is a phrase used to describe prairie regions of the United States and Canada in the 1930s. The Dust Bowl spread from Saskatchewan and Manitoba to the north, all the way to Oklahoma and parts of Texas and New Mexico in the south. In these areas, there were many serious dust storms and droughts during the 1930s. These caused major damage to the Dust Bowl areas' economies, ecology, and agriculture.

The people who lived in the Dust Bowl area were mostly farmers. Many years of intense farming without rain left the soil dry. When strong winds blew, they covered cities, towns, and farms in dried, dusty soil, ruining the farmland.

One famous storm on April 14, 1935, called Black Sunday, was so bad it covered dozens of cities in black clouds of dust and made it impossible to see the sky or even a few feet ahead. Writer Timothy Egan says that the Black Sunday storm "carried away twice as much dirt as was dug out of the earth to create the Panama Canal."

The Dust Bowl period is still considered one of the worst environmental disasters in United States history. Many thousands of people died from breathing in the dust, or from starvation. Many others who survived lost everything they had, and left the Dust Bowl to look for work in other parts of the country. These people were called "Dust Bowl refugees."

The seriousness of the Dust Bowl disaster later led to greater use of crop rotation, reforesting and other techniques to preserve the quality and quantity of topsoil in American and Canadian farms. Many songs, books, and works of art were created to tell stories of the people affected by the dust storms. Some of the most famous of these works are the novels The Grapes of Wrath and Of Mice and Men, by John Steinbeck, the songs of folk music singer Woody Guthrie, and the photography of Dorothea Lange, who took pictures of many Dust Bowl refugees and their families.

All content from Kiddle encyclopedia articles (including the article images and facts) can be freely used under Attribution-ShareAlike license, unless stated otherwise. Cite this article:
Dust Bowl Facts for Kids. Kiddle Encyclopedia.