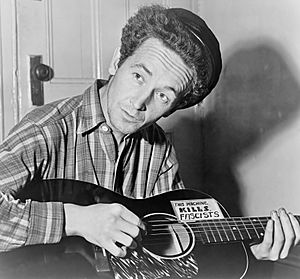 Guthrie wrote over a thousand songs during his career. His more famous songs include "This Land Is Your Land", "Mail Myself To You", "This Train", "Bound For Glory", and "Hobo's Lullaby". One of his most famous albums was titled Dust Bowl Ballads. He sang about the Great Depression, and the problems faced by farmers at the time of the Dust Bowl, when erosion and drought ruined millions of acres of farmland.

Much of the time he appeared opposed to governments as he saw them, and also politics. Guthrie identified strongly with the Industrial Workers of the World, called the "Wobblies", and also the Communist Party, but he never joined either one. His songs, and his interpretations of older songs, spoke to people of many different beliefs. Many of his songs used old tunes, that he gave new words.

The composer names of most folk songs are lost to history, or their songs have been adapted so many times that they completely change form. Even though Guthrie and his songs were well-known, they came to be accepted as genuine folk songs. They appeared in songbooks, and were performed and recorded by many different artists, and also sung by amateurs and families at home. Guthrie worked with or influenced many later musicians. 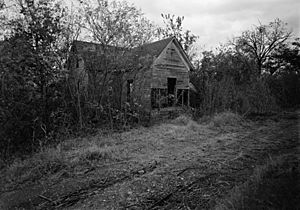 Guthrie's career was cut short by the illness Huntington's disease. By the late 1940s, Guthrie's health was getting poor, and his behavior was getting very erratic. He had gotten various diagnoses (including alcoholism and schizophrenia), but in 1952, it was determined that he was dying from Huntington's disease, He inherited it from his mother. Worrying that he was a danger to their children, his wife, Marjorie, said he needed to go back to California without her; they finally divorced. Over a long period of time, the illness left him in a wheelchair, then finally unable to get out of bed, or even hold a guitar.

He spent many years in a hospital, visited by his family and friends. Folk musician Pete Seeger was a regular visitor. One day, the young Bob Dylan came to visit Guthrie. He had hitchhiked from Minnesota to New York, to meet Guthrie. He played Guthrie "A Song to Woody", which he'd written as a tribute. Guthrie liked Dylan, and invited him back. Dylan stayed with the Guthrie family, and became friends with thirteen-year-old Arlo Guthrie, who also became a musician.

Guthrie died in 1967, from the effects of Huntington's disease in New York City, aged 55. There have been many tributes made to Guthrie and his music through the years. Actor David Carradine played him in the movie Bound for Glory. Guthrie's songs are still sung today, and are a symbol of American life.

All content from Kiddle encyclopedia articles (including the article images and facts) can be freely used under Attribution-ShareAlike license, unless stated otherwise. Cite this article:
Woody Guthrie Facts for Kids. Kiddle Encyclopedia.