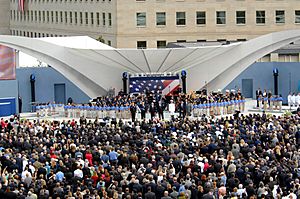 "God Bless America" is an American patriotic song. It was written by Irving Berlin in 1918. The song was revised in 1938. The latter was recorded by Kate Smith; it became her signature song.

In 1938, with the rise of Adolf Hitler, Berlin felt it was time to revive the song. On Armistice Day, 1938, Kate Smith performed the song on the radio.

The song is played at Major League Baseball games.

Céline Dion and LeAnn Rimes did cover versions of the song.

All content from Kiddle encyclopedia articles (including the article images and facts) can be freely used under Attribution-ShareAlike license, unless stated otherwise. Cite this article:
God Bless America Facts for Kids. Kiddle Encyclopedia.