Irving Berlin (born Israel Beilin; May 11, 1888 – September 22, 1989) was an American composer and lyricist, widely considered one of the greatest songwriters in American history. His music forms a great part of the Great American Songbook. Born in Imperial Russia, Berlin arrived in the United States at the age of five. He published his first song, "Marie from Sunny Italy", in 1907, receiving 33 cents for the publishing rights, and had his first major international hit, "Alexander's Ragtime Band" in 1911. He also was an owner of the Music Box Theatre on Broadway.

"Alexander's Ragtime Band" sparked an international dance craze in places as far away as Berlin's native Russia, which also "flung itself into the ragtime beat with an abandon bordering on mania." Over the years he was known for writing music and lyrics in the American vernacular: uncomplicated, simple and direct, with his stated aim being to "reach the heart of the average American," whom he saw as the "real soul of the country." In doing so, said Walter Cronkite, at Berlin's 100th birthday tribute, he "helped write the story of this country, capturing the best of who we are and the dreams that shape our lives."

He wrote hundreds of songs, many becoming major hits, which made him a legend before he turned thirty. During his 60-year career he wrote an estimated 1,500 songs, including the scores for 20 original Broadway shows and 15 original Hollywood films, with his songs nominated eight times for Academy Awards. Many songs became popular themes and anthems, including "Easter Parade", "White Christmas", "Happy Holiday", "Anything You Can Do (I Can Do Better)", and "There's No Business Like Show Business". His Broadway musical and 1943 film, This is the Army, with Ronald Reagan, had Kate Smith singing Berlin's "God Bless America" which was first performed in 1938.

Berlin's songs have reached the top of the charts 25 times and have been extensively re-recorded by numerous singers. Composer Douglas Moore sets Berlin apart from all other contemporary songwriters, as a "great American minstrel"—someone who has "caught and immortalized in his songs what we say, what we think about, and what we believe." Composer George Gershwin called him "the greatest songwriter that has ever lived", and composer Jerome Kern concluded that "Irving Berlin has no place in American music — he is American music." 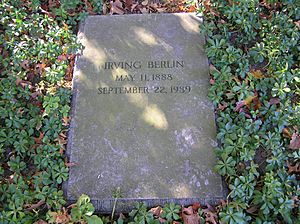 The grave of Irving Berlin in Woodlawn Cemetery, the Bronx, New York City

Berlin died in his sleep on September 22, 1989, of heart attack and natural causes, in New York City, at the age of 101. He was interred in the Woodlawn Cemetery in The Bronx, New York City.

After his death, Irving Berlin’s three daughters donated the songwriter’s musical collection of 750,000 items to the music archives of the Library of Congress.

On the evening following the announcement of his death, the marquee lights of Broadway playhouses were dimmed before curtain time in his memory. President George H. W. Bush said Mr. Berlin was "a legendary man whose words and music will help define the history of our nation." Just minutes before the President's statement was released, he joined a crowd of thousands to sing Berlin's "God Bless America" at a luncheon in Boston. Former President Ronald Reagan, who costarred in Berlin's 1943 musical This Is the Army, said, "Nancy and I are deeply saddened by the death of a wonderfully talented man whose musical genius delighted and stirred millions and will live on forever."

The following list includes scores mostly produced by Berlin. Although some of the plays using his songs were later adapted to films, the list will not include the film unless he was the primary composer.

All content from Kiddle encyclopedia articles (including the article images and facts) can be freely used under Attribution-ShareAlike license, unless stated otherwise. Cite this article:
Irving Berlin Facts for Kids. Kiddle Encyclopedia.