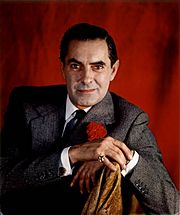 Tyrone Edmund Power, Jr. (May 5, 1914 – November 15, 1958) or Ty Power, was an American movie, television, radio and stage actor who appeared in dozens of movies from the 1930s to the 1950s, but is mostly known for his roles in The Mark of Zorro, Blood and Sand, The Black Swan, Prince of Foxes, The Black Rose, and Captain from Castile.

All content from Kiddle encyclopedia articles (including the article images and facts) can be freely used under Attribution-ShareAlike license, unless stated otherwise. Cite this article:
Tyrone Power Facts for Kids. Kiddle Encyclopedia.