He appeared in more than 40 movies and received 7 Academy Award nominations. He was a recipient of BAFTA, Golden Globe and Tony Awards for Best Actor. In the mid-1960s, Burton went up into the ranks of the top box office stars and by the late 1960s, was the highest-paid actor in the world. Burton received fees of $1 million or more plus a share of the gross receipts.

Burton remains closely associated in the public consciousness with his second wife, actress Elizabeth Taylor. The couple's relationship was rarely out of the news.

Burton was born Richard Walter Jenkins in the village of Pontrhydyfen, Neath Port Talbot, Wales. He grew up in a working class and Welsh-speaking household. He was the twelfth of thirteen children of a Welsh coal miner. His mother died before he was two years old. He was raised by his much older sister and her husband. He took his surname from his guardian Philip Burton, a teacher who coached him until he won a scholarship to Oxford University at the age of eighteen.

Burton was a youngster when he made his London acting debut in the play The Druid's Rest. After leaving military service in the air force in 1947, he established himself as a stage actor. He appeared with John Gielgud in The Lady's Not for Burning. His movie career began in 1949 with The Last Days of Dolwyn.

In 1962, he replaced Stephen Boyd as Mark Anthony in the movie Cleopatra opposite Elizabeth Taylor. Their off-screen romance made tabloid headlines around the world. After divorcing their respective spouses, they married in 1964. They then appeared in 11 movies together. The two divorced in 1974. They then reconciled and remarried in 1975. They divorced again the following year.

Burton also appeared on Broadway in the musical Camelot and the play Hamlet directed by John Gielgud. He appeared on television in 1960 as Caliban in the Hallmark Hall of Fame production of The Tempest with Claire Bloom and Maurice Evans. He also appeared on The Ed Sullivan Show with Julie Andrews to sing "What Do the Simple Folk Do?" from Camelot. This appearance boosted ticket sales for the stalled musical. 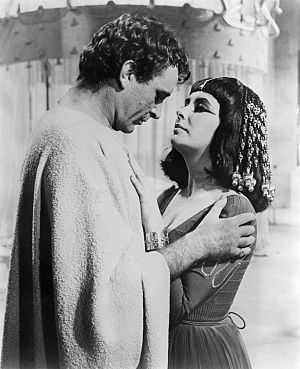 As Mark Antony in Cleopatra (1963), with Elizabeth Taylor as the titular character

Burton married Sybil Williams in 1949, with whom he had two daughters. After his divorce from Elizabeth Taylor, he married Suzy Hunt in 1976. This marriage also ended in divorce. He then married Sally Hay in 1983.

He was awarded the Commander of the British Empire (CBE) by Elizabeth II in 1970.

He died at his home in Céligny, Switzerland, on 5 August 1984, from a cerebral haemorrhage.

All content from Kiddle encyclopedia articles (including the article images and facts) can be freely used under Attribution-ShareAlike license, unless stated otherwise. Cite this article:
Richard Burton Facts for Kids. Kiddle Encyclopedia.