Sir John Vincent Hurt CBE (22 January 1940 – 25 January 2017) was an English actor whose screen and stage career spanned more than 50 years. Hurt was regarded as one of Britain's finest actors; director David Lynch described him as "simply the greatest actor in the world".

Hurt came to prominence for his role as Richard Rich in the film A Man for All Seasons (1966) and gained BAFTA Award nominations for his portrayals of Timothy Evans in 10 Rillington Place (1971) and Quentin Crisp in television film The Naked Civil Servant (1975) – winning his first BAFTA for the latter. He played Caligula in the BBC TV series I, Claudius (1976). Hurt's performance in the prison drama Midnight Express (1978) brought him international renown and earned Golden Globe and BAFTA Awards, along with an Academy Award nomination. His BAFTA-nominated portrayal of astronaut Kane, in science-fiction horror Alien (1979), yielded a scene which has been named by several publications as one of the most memorable in cinematic history.

Hurt earned his third competitive BAFTA, along with his second Oscar and Golden Globe nominations, as Joseph Merrick in David Lynch's biopic The Elephant Man (1980). Other significant roles during the 1980s included Bob Champion in biopic Champions (1984), Mr. Braddock in the Stephen Frears drama The Hit (1984), Winston Smith in Nineteen Eighty-Four (1984) and Stephen Ward in the drama depicting the Profumo affair, Scandal (1989). Hurt was again BAFTA-nominated for his work in Irish drama The Field (1990) and played the primary villain, James Graham, in the epic adventure Rob Roy (1995). His later films include the Harry Potter film series (2001–11), the Hellboy films (2004 and 2008), supernatural thriller The Skeleton Key (2005), western The Proposition (2005), political thriller V for Vendetta (2005), sci-fi adventure Indiana Jones and the Kingdom of the Crystal Skull (2008) and the Cold War espionage film Tinker Tailor Soldier Spy (2011). Hurt reprised his role as Quentin Crisp in An Englishman in New York (2009), which brought his seventh BAFTA nomination. He portrayed the War Doctor in BBC TV series Doctor Who in 2013.

Hurt's was described as the "most distinctive voice in Britain"; The Observer. His voice acting career encompassed films such as Watership Down (1978), the animated The Lord of the Rings (1978), The Plague Dogs (1982), The Black Cauldron (1985) and Dogville (2003), as well as the BBC TV series Merlin (2008–2012). In 2012, he was honoured with the Lifetime Achievement BAFTA Award, in recognition of his "outstanding contribution to cinema". He was knighted in 2015 for his services to drama. 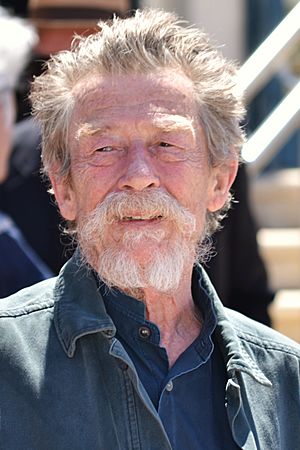 Hurt had an older brother, Br. Anselm (born Michael), a Roman Catholic convert who became a monk and writer at Glenstal Abbey; Hurt had contributed to his brother's books. Hurt also had an adopted sister, Monica. In 1962, Hurt's father left his parish in Cleethorpes to become headmaster of St. Michael's College in the Central American country of British Honduras. Hurt's mother died in 1975, and his father died in 1999 at the age of 95.

In 1962, Hurt married actress Annette Robertson. The marriage ended in 1964. In 1967, he began his longest relationship, with French model Marie-Lise Volpeliere-Pierrot. The couple had planned to get married after 15 years together; however, on 26 January 1983 Hurt and Volpeliere-Pierrot went riding early in the morning near their house in Ascott-under-Wychwood, Oxfordshire; Volpeliere-Pierrot was thrown off her horse. She went into a coma and died later that day.

In September 1984, Hurt married his old friend, American actress Donna Peacock, at a local Register Office. The couple moved to Kenya but divorced in January 1990.

On 24 January 1990, Hurt married American production assistant Joan Dalton, whom he had met while filming Scandal. With her, he had two sons. This marriage ended in 1996 and was followed by a seven-year relationship with Dublin-born presenter and writer Sarah Owens. The couple moved to County Wicklow, where they settled close to their friends, director John Boorman and Claddagh Records founder and Guinness heir Garech Browne.

In July 2002, the couple separated. In March 2005, Hurt married his fourth wife, advertising film producer Anwen Rees-Meyers. He gave up smoking and drinking after his fourth marriage. He lived in Cromer, Norfolk.

On 16 June 2015, Hurt publicly announced that he had been diagnosed with early-stage pancreatic cancer. He confirmed that he would continue to work while undergoing treatment and said that both he and the medical team treating him were "more than optimistic about a satisfactory outcome". Following treatment, Hurt stated that his cancer was in remission on 12 October 2015. Hurt died at his home in Cromer, Norfolk, on 25 January 2017, three days after his 77th birthday. 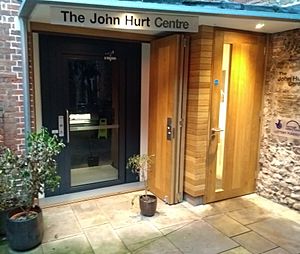 The John Hurt centre is located at the Norwich Cinema City

In 2004, Hurt was made a Commander of the Order of the British Empire (CBE). He was created a Knight Bachelor in the 2015 New Year Honours for services to drama. On 17 July 2015, he attended an investiture ceremony at Windsor Castle where he received the accolade from Queen Elizabeth II.

In 2012, Hurt was among the British cultural icons selected by artist Sir Peter Blake to appear in a new version of his most famous artwork – the Beatles' Sgt. Pepper's Lonely Hearts Club Band album cover – to celebrate the British cultural figures of his life that he most admires.

In 2014, Hurt received the Will Award, presented by the Shakespeare Theatre Company, along with Stacy Keach and Dame Diana Rigg. The John Hurt Centre opened in September 2016 and is an education and exhibition space located at Cinema City, Norwich.

Since 2003, Hurt was a patron of the Proteus Syndrome Foundation, both in the United Kingdom and in the US. Proteus syndrome is the condition that Joseph Merrick, whom Hurt played (renamed as John Merrick) in The Elephant Man, is thought to have suffered from, although Merrick's exact condition is still not known with certainty.

Since 2006, Hurt had been a patron of Project Harar, a UK-based charity working in Ethiopia for children with facial disfigurements. Hurt was announced as patron of Norwich Cinema City in March 2013.

On 23 January 2013, he was made an Honorary Doctor of Arts by the University of Lincoln, at Lincoln Cathedral.

All content from Kiddle encyclopedia articles (including the article images and facts) can be freely used under Attribution-ShareAlike license, unless stated otherwise. Cite this article:
John Hurt Facts for Kids. Kiddle Encyclopedia.