Cromer ( KROH-mər) is a coastal town and civil parish on the north coast of the English county of Norfolk. It is 23 miles (37 kilometres) north of Norwich, 116 miles (187 kilometres) north-northeast of London and four miles (six kilometres) east of Sheringham on the North Sea coastline. The local government authorities are North Norfolk District Council, whose headquarters is on Holt Road in the town, and Norfolk County Council, based in Norwich. The civil parish has an area of 4.66 km2 (1 13⁄16 sq mi) and at the 2011 census had a population of 7,683.

The town is notable as a traditional tourist resort and for the Cromer crab, which forms the major source of income for local fishermen. The motto Gem of the Norfolk Coast is highlighted on the town's road signs.

Cromer is not mentioned in the Domesday Book of 1086. The place-name 'Cromer' is first found in a will of 1262 and could mean 'Crows' mere or lake'. There are other contenders for the derivation, a north country word 'cromer' meaning 'a gap in the cliffs' or less likely a direct transfer from a Danish placename.

It is reasonable to assume that the present site of Cromer, around the parish church of Saints Peter and Paul, is what was in 1337 called Shipden-juxta-Felbrigg, and by the end of the 14th century known as Cromer. A reference to a place called Crowemere Shipden can be seen in a legal record, dated 1422, (1 Henry VI), the home of John Gees. The other Shipden is now about a quarter of a mile to the north east of the end of Cromer Pier, under the sea. Its site is marked by Church Rock, now no longer visible, even at a low spring tide. In 1888 a vessel struck the rock, and the rock was subsequently blown up for safety.

Cromer became a resort in the early 19th century, with some of the rich Norwich banking families making it their summer home. Visitors included the future King Edward VII, who played golf here. The resort's facilities included the late-Victorian Cromer Pier, which is home to the Pavilion Theatre. In 1883 the London journalist Clement Scott went to Cromer and began to write about the area. He named the stretch of coastline, particularly the Overstrand and Sidestrand area, "Poppyland", and the combination of the railway and his writing in the national press brought many visitors. The name "Poppyland" referred to the numerous poppies which grew (and still grow) at the roadside and in meadows.

Cromer suffered several bombing raids during the Second World War. Shortly after one raid, Cromer featured as the location for an episode of "An American In England", written by Norman Corwin with the narrator staying in the Red Lion Hotel and retelling several local accounts of life in the town at wartime. The radio play first aired in the USA on 1 December 1942 on the CBS/Columbia Workshop programme starring Joe Julian. The account mentions some of the effects of the war on local people and businesses and the fact that the town adopted a minesweeper, HMS Cromer, a Bangor class minesweeper.

On 5 December 2013 the town was affected by a storm surge which caused significant damage to the town's pier and seafront.

In 2016, the Cromer shoal chalk beds, thought to be Europe's largest chalk reef, were officially designated as a Marine Conservation Zone.

For one week in August the town celebrates its Carnival Week. The event's 40th anniversary was held in 2009. Attractions included the carnival queen competition, parade of floats and a fancy dress competition. The highlight of the week was an over-the-sea aerial display by the Red Arrows.

Cromer is twinned with Nidda, Germany and Crest, France. The town has an Air Training Corps Squadron and an Army Cadet Force Platoon, based at Cromer High School.

The town has a Friday market and a number of independent retailers in its centre. Cromer Hospital provides services across the North Norfolk area. It includes a minor injuries unit and is run by the Norfolk and Norwich University Hospitals NHS Foundation Trust.

Cromer stands between stretches of coastal cliffs which, to the east, are up to 70 metres (230 ft) high. According to palaeontologist Dr James Neenan, from the Oxford University Museum of Natural History, the cliffs are part of a Norfolk coastline area rich in Pleistocene fossils. In 2017 a prehistoric rhino was found in West Runton, dating back 700,000 years to the Cromerian Interglacial.

The Church of St Peter and St Paul dates from the 14th century and is in the centre of the town. After falling into disrepair it was rebuilt in the late 19th century by architect, Arthur Blomfield. At 160 ft 4 in (48.87 m) the Bell tower is the highest in the county. Also, of note are the vast stained glass windows which commemorate various members of the lifeboat crew and other features of the resort.

The Hotel de Paris was originally built in 1820 as a coastal residence for Lord Suffield. In 1830 the building was converted into a hotel by Pierre le Francois. Norfolk-born architect George Skipper extensively remodelled the building between 1895 and 1896. Today (2010), the hotel which occupies an elevated location overlooking the town's pier still provides accommodation to visitors. Other notable hotels include the 17th century Red Lion Hotel, the Victorian Sandcliff Hotel and the Edwardian Cliftonville Hotel.

Cromer Hall is located to the south of the town in Hall Lane. The original hall was destroyed by fire and was rebuilt in 1829 in a Gothic Revival style, by Norfolk architect William John Donthorne. Henry Baring, of the Baring banking family, acquired the estate around this time. Evelyn Baring, 1st Earl of Cromer was born at the hall in 1841. In 2010 the building was the home of the Cabbell Manners family. In 1901, author Arthur Conan Doyle was a guest at the hall. After hearing the legend of the Black Shuck, a ghostly black dog, he is thought to have been inspired to write the classic novel The Hound of the Baskervilles.

The fishermen also crewed Cromer's two lifeboats. Most famous of the lifeboatmen was Henry Blogg, who received the RNLI gold medal for heroism three times, and the silver medal four times. Cromer Lifeboat Station was founded in 1804, the first in Norfolk. Rowing lifeboats were stationed there through the 19th century.

In the 1920s a lifeboat station was built at the end of the pier, enabling a motor lifeboat to be launched beyond the breakers. A number of notable rescues carried out between 1917 and 1941 made the lifeboat and the town well known throughout the United Kingdom and further afield. The area covered by the station is large, as there is a long run of coastline with no harbour – Great Yarmouth is 40 miles (65 km) by sea to the south east and the restricted harbour of Wells next the Sea 25 miles (40 km) to the west. Today the offshore lifeboat on the pier performs about a dozen rescues a year, with about the same number for the inshore lifeboat stationed on the beach.

The Duke of Kent officially named the town's new lifeboat the Lester in a ceremony on 8 September 2008.

The railway came to Cromer in 1877, with the opening of Cromer High railway station by the Great Eastern Railway. Ten years later, a second station, Cromer Beach, was opened by the Midland and Great Northern Joint Railway, bringing visitors from the East Midlands. The second station, now known simply as Cromer, remains. Direct services were operated from London, Manchester, Leicester, Birmingham, Leeds, Peterborough and Sheffield, but today a service between Norwich and Sheringham on the Bittern Line is all that remains. The closed Cromer tunnel linked the Beach station with the Mundesley line to the east. It was the only railway tunnel to be built in Norfolk.

Bus and coach services are provided by several companies which link the town to destinations including Norwich, Sheringham, Holt, King's Lynn and Cambridge. The A140 links to Norwich, the A148 (direct) and A149 (coast road) to King's Lynn, and the A149 to the Norfolk Broads and Great Yarmouth. The B1159 is a coastal road out towards Mundesley. 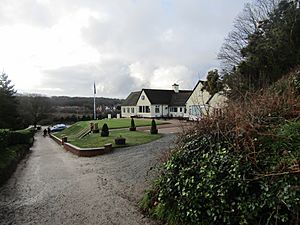 Cromer has sports clubs and leisure facilities. Situated on the cliffs between the town and Overstrand to the east, the Royal Cromer Golf Club was founded in 1888 and given royal status by the Prince of Wales, one of the founding members, in the same year. The course was originally designed by Old Tom Morris and hosted the British Ladies Amateur Golf Championship in 1905, before which an unofficial match was held between British and American ladies, the first international golf match to be played. The club, which is the second oldest in Norfolk, has hosted PGA events.

Cromer Cricket Club is one of the oldest clubs in the county and is based at the Norton Warnes Cricket Ground. The club currently plays in the Norfolk Alliance Premier Division. Cabbell Park has been the home of Cromer Town F.C. since 1922. The long established club plays in the Premier Division of the Anglian Combination. The town's tennis and squash courts are located at Norwich Road and are open to the public.

The Norfolk Coast Path passes through the town and is also the termination of the Weavers' Way. The 92-mile (148-kilometre) Norfolk Coast Cycleway runs parallel to the coast and passes through a mixture of quiet roads and country lanes to link the town with Kings Lynn to the west and Great Yarmouth in the east.

Traditionally, Cromer was a fishing town. It grew as a fishing station over the centuries, and was a year-round fishery into the 20th century, with crabs and lobsters in the summer, drifting for longshore herring in the autumn and long-lining, primarily for cod, in the winter. The pattern of fishing has changed since the 1980s, and it is now almost completely focused on crabs and lobsters. The town is famous for the Cromer crab, which is now the major source of income for the local fishermen. In 2016, about ten boats plied their trade from the foot of the gangway on the east beach, with shops in the town selling fresh crab, whenever the boats go to sea. By 2018, experienced crabmen were having difficulty attracting young people to the business, perhaps because of the long working hours required during the season. Lobster trapping was also continuing. 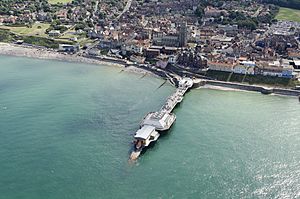 Aerial view of Cromer Pier with Cromer in the background

Tourism developed in the town during the Victorian period and is now an important part of the local economy. The town is a popular resort and acts as a touring base for the surrounding area. The coastal location means that beach holidays and fishing are important, with the beach and pier being major draws. Visitor attractions within the town include Cromer Pier and the Pavilion Theatre on the pier. Close to the town's pier the RNLI Henry Blogg Museum is housed inside the early 21st century Rocket House. The museum has the Cromer Lifeboat H F Bailey III (ON 777) as its centrepiece and illustrates the history of the town's lifeboats and lifeboatman Henry Blogg's most famous rescues.

The South American themed Amazona zoo park opened to the public in 2006 and is to the south of the town. The park covers ten acres (four hectares) of former brick kilns and woodland on the outskirts of the town and includes animals including jaguar and puma.

Cromer Academy is the town's only high school. It educates children aged 11 to 16. For sixth-form education, children travel to Sheringham, Paston College in North Walsham, or Norwich. The town also has a junior school educating children from 5 to 11 years of age, an infants school (Suffield Park infants) and an attached nursery.

All content from Kiddle encyclopedia articles (including the article images and facts) can be freely used under Attribution-ShareAlike license, unless stated otherwise. Cite this article:
Cromer Facts for Kids. Kiddle Encyclopedia.