Sheringham ( population 7,367) is an English seaside town within the county of Norfolk, United Kingdom. The motto of the town, granted in 1953 to the Sheringham Urban District Council, is Mare Ditat Pinusque Decorat, Latin for "The sea enriches and the pine adorns".

Historically, the parish of Sheringham comprised the two villages of Upper Sheringham, a farming community, and Lower Sheringham, which combined farming with fishing.

The fishing industry was at its peak in the late 19th and early 20th centuries, as the coming of the railways made it possible for fish to be transported more efficiently to market. Through the 1900s the focus of the fishing, as all along the north Norfolk coast, began to be on crabs, lobsters and whelks. The local fishermen were major suppliers of crabs and lobsters to the London fish markets. Long lining for cod and the catching of herring began to become less important in the second half of the century, as did whelking. Today, from a peak of maybe 200 boats, Sheringham has eight boats operated single-handed.

The current town of Sheringham was once Lower Sheringham, a fishing station for the main village, now known as Upper Sheringham. It is a railway town that was developed with the coming of the Midland and Great Northern Joint Railway line in the late 19th century. Most of Sheringham's range of buildings and shops come from this period and the early 20th century. It has a particularly interesting range of buildings using flint, not normally in the traditional Norfolk style but in a variety of techniques.

Sheringham town centre is centred on a traditional high street with a wide range of privately owned shops. On Saturdays throughout the year there is a popular market in the car park next to the railway station which attracts large crowds even out of the holiday season. The town also has a good selection of specialist shops such as second-hand books, antiques and bric-a-brac, fishing tackle and bait, a computer shop, a model shop, and arts and craft shops. The Sheringham Little Theatre has a wide range of productions on throughout the year including a well-established summer repertory season running from July to September, and a popular pantomime at Christmas; in the foyer is a coffee shop with display of art by local artists. There is a selection of food outlets, pubs, restaurants and a youth hostel.

On 15 October 2010, Tesco won a 14-year battle to open a store in the town. In a split vote North Norfolk District Council development committee chairman Simon Partridge used his casting vote in favour of the scheme. The store finally opened on 24 October 2013.

An annual Cromer and Sheringham Crab/Lobster festival is held in May, and the town's Carnival is held at the beginning of August.

Otterndorf Green is a small green space between the town's railway stations. It commemorates Sheringham's twinning with the German town of Otterndorf.

The Church of England Parish Church of St Peter was consecrated in 1897.

Sheringham is reputed to be the only place in the world to have four of its original lifeboats. The Sheringham Museum Trust owns three of these: JC Madge (1904–36) pulling and sailing. Foresters Centenary (1936–61) the towns first motorised lifeboat. Manchester Unity of Oddfellows (1961–90) an Oakley Class lifeboat, Sheringham’s last offshore boat. Within the next two to three years Sheringham Museum Trust plans to have an extended museum to house this unique collection together with three crab boats and general lifeboat and fishing industry ephemera. The town has no harbour, so the lifeboat has to be launched by tractor, and the fishing boats are hauled up the beach. An old sail-powered lifeboat is preserved in the former lifeboat shed and the three other preserved RNLI lifeboats are kept in another centre.

The Roman Catholic Church of St Joseph, on Cromer Road was designed by Sir Giles Gilbert Scott. In 1901 a donation of over £3,000 by Catherine Deterding, the wife of the managing director and founder of the Shell Oil Company, enabled the purchase of land around an existing chapel to build a new church. Work began in 1902 and the first section, St Joseph's chapel was completed in 1908. In 1910 the second section opened, which comprises the sanctuary, nave and the porch. Later the church was completed by extending the nave and adding a new porch. The complete building was consecrated on 25 March 1935. From the outside it is possible to see the join between the northern two-thirds opened in 1910, and the southern extension completed in 1935. This large red-brick church towers over its neighbours. The north end, (the liturgical east), has a high rose window, while each long side is pierced by three vast Perpendicular-style windows. The church is entered through a porch and into a narthex on the south west corner of the building. Behind a grilled area to the east there is a large framed icon of the Blessed Virgin. Inside the church the height and narrowness emphasizes the arcades which are also of a good height and have arches of alternate sizes. The décor is a mixture of both the arts and crafts movement and industrial Gothic, a signature of Gibert Scott’s style. The font is a replica the seven sacraments font at Little Walsingham. There are some good pieces of early 20th century devotional art much of which was imported from the studio and workshop of Ferdinand Stuflesser in the Austrian Tyrol. There is a rood screen above the entrance to the sanctuary. The Stations of the Cross, ordered from Stuflesser, spent the First World War in the hold of a German freighter impounded at Genoa. 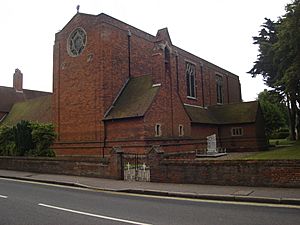 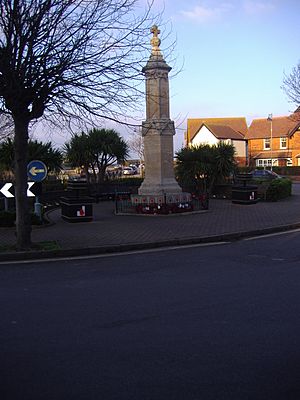 The memorial to the men and women of Sheringham and Beeston Regis who died in military service during the two world wars is located at on the traffic island at the intersection of the Boulevard, St Nicholas Place and the Esplanade. It was designed by Herbert Palmer somewhat in the style of an Eleanor cross. It is of Clipsham stone and stands 26 feet (7.9 m) tall. It was unveiled on 1 January 1921. The names of the dead are on four panels that form the base of the cross. A recent addition to the memorial is a small wrought-iron fence around the base with poppy motifs. There are also further names on memorial boards in the nearby parish church of St Peter.

Sheringham Park and other prominent property

The Oddfellows Hall on the Lifeboat Plain, built in 1867, was the original RNLI Lifeboat station and a gathering place for fishermen and boat builders, and has over the years been used as a craft centre, used to exhibit a model railway, and to display a model village. The hall was also used as a shoe factory.

After years of standing idle, it re-opened in October 2007 having been completely refurbished at a cost of £250,000. A collection of organisations such as East of England Development Agency, North Norfolk District Council, Sheringham plus Community Partnership and other interested parties worked together to facilitate the refurbishment of the hall and bring it back into community use.

Sheringham nestles under the nearby hill of Beeston Bump, a geological SSSI which was the site of one of the Second World War secret Y-stations. The Bump can be climbed using the Norfolk Coast Path from either the east or west. The Bump began forming between 10,000 and 15,000 years ago at the end of the latest Ice Age. The huge mass of ice caused a depression in the land and, as the ice melted, the land mass began to 'spring' slowly back in a process called isostatic readjustment. This process still occurs in the UK, as Northern England is slowly rising.

The northern frontage of Sheringham is protected by a concrete seawall which also serves as the promenade. It is a vital part of the protection of the town against the natural erosion that occurs along the North Norfolk coast. The storm surge of 1953 considerably damaged Sheringham's wooden sea defences. In front of the sea wall are groynes, armoured at their bases with large blocks of natural rock, which prevent long shore drift. There are numerous drains along the frontage. To the east towards West Runton the seawall ends just below Beeston Bump. From there a timber revetment and groyne system, designed and constructed in 1976, runs eastwards for 2 km (just over a mile) to West Runton Gap. The shoreline management plans of the Department for Environment include a policy of "managed retreat" along this stretch of coast. The revetment between Sheringham and West Runton is no longer being maintained and is thus in a poor state of repair. Sections that become hazardous will be removed. The coastline will then be left to evolve naturally.

All content from Kiddle encyclopedia articles (including the article images and facts) can be freely used under Attribution-ShareAlike license, unless stated otherwise. Cite this article:
Sheringham Facts for Kids. Kiddle Encyclopedia.