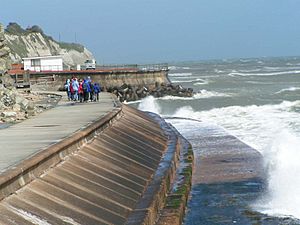 An example of a modern seawall in Ventnor on the Isle of Wight, England 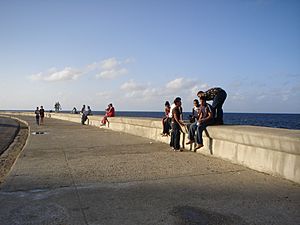 People socializing and walking at the Malecón, Havana 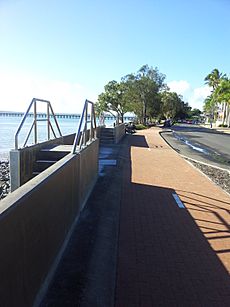 A seawall (or sea wall) is a form of coastal defence constructed where the sea, and associated coastal processes, impact directly upon the landforms of the coast. The purpose of a sea wall is to protect areas of human habitation, conservation and leisure activities from the action of tides, waves, or tsunamis. As a seawall is a static feature it will conflict with the dynamic nature of the coast and impede the exchange of sediment between land and sea. The shoreline is part of the coastal interface which is exposed to a wide range of erosional processes arising from flowing water sources, wind and terrestrial sources, meaning that a combination of denudational processes will work against a seawall.

The coast is generally a high-energy, dynamic environment with spatial variations over a wide range of timescales. The coast is exposed to erosion by rivers and winds as well as the sea, so that a combination of denudational processes will work against a sea wall. Because of these persistent natural forces, sea walls need to be maintained (and eventually replaced) to maintain their effectiveness.

The many types of sea wall in use today reflect both the varying physical forces they are designed to withstand, and location specific aspects, such as local climate, coastal position, wave regime (determined by wave characteristics and effectors), and value (morphological characteristics) of landform. Sea walls are hard engineering shore-based structures which protect the coast from erosion. But various environmental problems and issues may arise from the construction of a sea wall, including disrupting sediment movement and transport patterns. Combined with a high construction cost, this has led to an increasing use of other soft engineering coastal management options such as beach replenishment.

Sea walls may be constructed from various materials, most commonly reinforced concrete, boulders, steel, or gabions. Other possible construction materials are: vinyl, wood, aluminium, fibreglass composite, and large biodegrable sandbags made of jute and coir. In the UK, sea wall also refers to an earthen bank used to create a polder, or a dike construction. The type of material used for construction is hypothesized to affect the settlement of coastal organisms, although the precise mechanism has yet to be identified.

A seawall works by reflecting incident wave energy back into the sea, thus reducing the energy available to cause erosion. Sea walls have two specific weaknesses. First, wave reflection from the wall may result in hydrodynamic scour and subsequent lowering of the sand level of the fronting beach. Second, sea walls may accelerate erosion of adjacent, unprotected coastal areas because they affect the littoral drift process.

Different designs of man-made tsunami barriers include building reefs and forests to above-ground and submerged seawalls. In 2005, India began planting Casuarina and coconut saplings on its coast as a natural barrier against future tsunamis like the 2004 Indian Ocean earthquake. Studies have found that an offshore tsunami wall could reduce tsunami wave heights by up to 83%.

The design and type of sea wall that is appropriate depends on aspects specific to the location, including the surrounding erosion processes. There are three main types of seawalls: vertical, curved or stepped, and mounds, as set out in the table:

All content from Kiddle encyclopedia articles (including the article images and facts) can be freely used under Attribution-ShareAlike license, unless stated otherwise. Cite this article:
Seawall Facts for Kids. Kiddle Encyclopedia.