Ventnor (/ˈvɛntnər/) is a seaside resort and civil parish established in the Victorian era on the south coast of the Isle of Wight, England. It is situated south of St Boniface Down (which, at 241 metres (791 feet), is the highest point on the island), and is built on steep slopes leading down to the sea. The higher part is referred to as Upper Ventnor (officially Lowtherville); the lower part, where most amenities are located, is known as Ventnor. Ventnor is sometimes taken to include the neighbouring settlements of St. Lawrence and Bonchurch .

Its relatively sheltered location beneath the downs produces a microclimate with more sunny days and fewer frosts than the rest of the island. This allows many species of subtropical plant to flourish; Ventnor Botanic Garden is particularly notable.

The local geomorphology defines the town. A significant area is built on clay, which suffers from serious landslip; the ground is notoriously unstable and many buildings and amenities have been lost to subsidence or cliff-falls. There is a local expression: "We live near the sea and are getting nearer every day". A nearby Site of Special Scientific Interest is known as the Landslip. 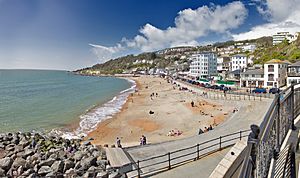 Interactions between the chalk downs and softer undercliff rocks drive the geological changes affecting Ventnor. A Graben runs above the town. This marks the top of the series of landslips upon which Ventnor is built. The fault moves regularly, which has destroyed buildings over the years, led to serious cracking of local roads, and disrupted utilities. The latest evidence can be seen at the former bus stop in Ocean View Road, where a 5" by 3" vent has opened.

Three miles off the coast, there is a parallel ridge under the sea rising to within 15 metres (49 ft) of the surface. The tidal flows along the Channel, forced between it and the island, have carved out a deep channel known as 'St. Catherine's Deep'. 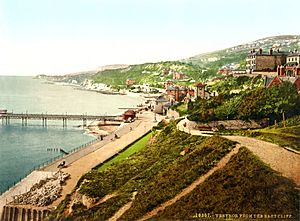 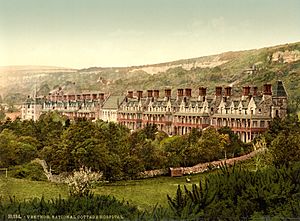 The town grew from a small fishing hamlet in the 19th century, situated between the villages of Bonchurch and St Lawrence. Each of these villages was its own parish, but the area now occupied by Ventnor was divided between the parishes of Godshill and Newchurch.

Charles Dickens lived nearby for a time.

However, it was with the coming of the Isle of Wight Railway in 1866 that the town became both a tourist and a health resort. The fresh air and warm climate were considered beneficial to sufferers of tuberculosis, and several sanatoriums were established.

The Isle of Wight Railway at one time ran a non-stop train from Ryde to Ventnor, named 'The Invalid Express' for the consumptive patients being taken to treatment at Ventnor. One train famously completed the journey in a little over twenty minutes. The town reached its zenith in 1930s, when steam packets operated between Southsea and the town's pier. The relatively small sandy beach was ideal for bathing, and is still popular today. Victorian era hotels in the town's suburbs and near the sea, such as Ventnor Towers Hotel, remain popular with tourists.

History of the railway

Between 2004 and 2010 a 'rail link' bus by Wightbus ran from St Lawrence and Ventnor to Shanklin, facilitating the journey to and from Ventnor.

Southern Vectis run buses on route 3 and 6 from Ventnor to destinations including Newport, Ryde, Sandown, Shanklin and Niton. Additionally Island Minibus service run the local number 31 route which connects Ventnor to Bonchurch Village, the Botanic Garden and Esplanade. Previously operated by Wightbus, the link to the Esplanade was restored in 2011 after many years, despite suggestions that this would be impractical. 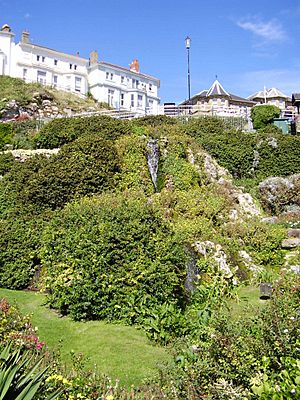 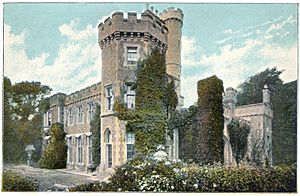 Steephill Castle, Ventnor c1910. The castle was demolished in 1963

Ventnor Botanic Garden occupies the site of the former Royal National Hospital for Chest Diseases, and has a variety of tropical plants. Annual rainfall of 31 inches (790 mm) and a particularly warm and sunny microclimate allows a variety of plants normally too tender for mainland Britain to grow. The garden includes plants from across the world, particularly Australia and New Zealand, but also from Japan and the Mediterranean. There is a temperate house, and a visitor centre renovated in 2001.

The seaside of Ventnor

Ventnor and the Isle of Wight has a maritime climate with cool summers and mild winters. The Met Office maintain a weather station at Ventnor Park. Because of its coastal location, Ventnor currently holds the English record for the warmest nights for the months of...

The largest British colony of common wall lizards lives in the town; a wall specially designed as a habitat was built at the Botanic Garden.

Other places named after Ventnor

All content from Kiddle encyclopedia articles (including the article images and facts) can be freely used under Attribution-ShareAlike license, unless stated otherwise. Cite this article:
Ventnor Facts for Kids. Kiddle Encyclopedia.