Ryde is an English seaside town and civil parish on the north-east coast of the Isle of Wight. The built-up area had a population of 23,999 according to the 2011 Census and an estimate of 24,847 in 2019. Its growth as a seaside resort came after the villages of Upper Ryde and Lower Ryde were merged in the 19th century, as can still be seen in the town's central and seafront architecture. The resort's expansive sands are revealed at low tide. Their width means the regular ferry service to the mainland requires a long listed pier – the fourth longest, in fact, in the United Kingdom and the oldest survivor.

In 1782 numerous bodies of men, women and children from HMS Royal George, which sank suddenly at Spithead, were washed ashore at Ryde. Many were buried on land that is now occupied by the Esplanade. A memorial to them was erected in June 2004. 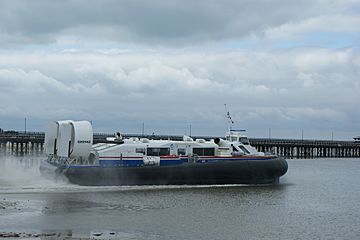 There is a hovercraft service to Southsea, which takes nine minutes. It is operated by Hovertravel near the Esplanade close to Ryde Esplanade railway station and the bus station. A catamaran service run by Wightlink operates from Ryde Pier to Portsmouth Harbour, which connects with both Island Line trains and mainland trains to London Waterloo.

The bus interchange lies between Ryde Pier and the Hover Terminal on the Esplanade. Ryde is the second busiest stop in the Southern Vectis network after Newport. The busiest route is No. 9 to Newport, running every 10 minutes in the daytime. Others include Nos 2, 3, 4 and 8 and local route 37. An open-top bus service, The Downs Tour, runs in the summer. 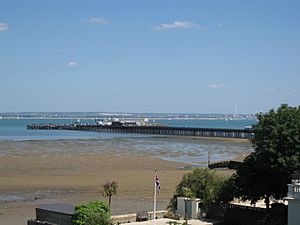 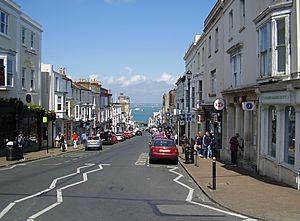 The town's large and long esplanade area has always been an attraction for tourists, especially those day-tripping from the mainland, as the amenities are all available by walking from the pier. A swimming pool, bowls club, ice rink, bowling alley, and boating lake are among the attractions, and there are various children's playgrounds, amusement arcades and cafés.

At one time Ryde had two separate piers; the other being the Victoria Pier, no longer in existence. Ryde has its own inshore rescue service which mostly has to deal with people becoming stranded on sandbanks as the incoming tide cuts them off from the shore. The pier is also a feature of the 67-mile (108 km) Isle of Wight Coastal Path, which is marked with blue signs with a white seagull.

Ryde has a small marina located to the east of Ryde Pier. It is tidal and dries out at low water hence it is more suitable for smaller sailing (bilge keel) and motor cruisers. It has provision for up to 200 boats, either on floating pontoons or leaning against the harbour wall. It has a full-time harbourmaster who posts useful snippets of information on the noticeboard outside the harbour office including weather information, tide times, cruise liner movements and events that occurred on this day in history. 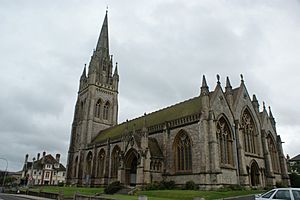 The twin church spires clearly visible from the sea belong to All Saints' (the taller) and Holy Trinity churches. All Saints' Church is located in Queens Road on a road junction known as Five Ways. It was designed by George Gilbert Scott and completed in 1872. The spire is 177 feet (54 m) tall. Holy Trinity Church is in Dover Street. It was designed by Thomas Hellyer and completed in 1845. Holy Trinity Church closed in January 2014 and the building became the Aspire Ryde community centre.

The town’s Roman Catholic church, St. Mary's, is located in High Street. It was built in 1846 at a cost of £18,000. This was provided by Elizabeth, Countess of Clare. The church was designed by Joseph Hansom inventor of the hansom cab. Other churches include St James Church and St. Michael and All Angels, Swanmore. There are also Baptist, Methodist, United Reformed and Elim churches in the town. 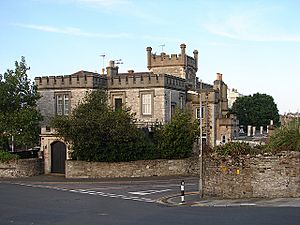 Ryde Castle, situated on the Esplanade, was built c. 1840 as a private house in crenellated style and is now a hotel. It was left heavily damaged after a fire in 2012, and reopened after major restoration in 2013.

Beldornie Tower on Augusta Road was at one point a property of the Earl of Yarborough. The house dates back to the 16th or early 17th century. The house was virtually rebuilt c. 1840 in Gothic-Jacobean style with the addition of a west wing in 1880.

All content from Kiddle encyclopedia articles (including the article images and facts) can be freely used under Attribution-ShareAlike license, unless stated otherwise. Cite this article:
Ryde Facts for Kids. Kiddle Encyclopedia.