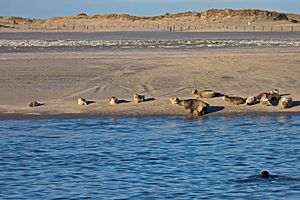 A seaside resort is a resort town or resort village, or resort hotel, located on the coast. Sometimes it is also an officially accredited title, that is only awarded to a town when the requirements are met (like the title Seebad in Germany). Where a beach is the primary focus for tourists, it may be called a beach resort

All content from Kiddle encyclopedia articles (including the article images and facts) can be freely used under Attribution-ShareAlike license, unless stated otherwise. Cite this article:
Seaside resort Facts for Kids. Kiddle Encyclopedia.