Sochi is a city in Krasnodar Krai, Russia, located on the Black Sea coast near the border between Georgia/Abkhazia and Russia. The Greater Sochi area, which includes territories and localities subordinated to Sochi proper, has a total area of 3,526 square kilometers (1,361 sq mi) and sprawls for 145 kilometers (90 mi) along the shores of the Black Sea near the Caucasus Mountains. The area of the city proper is 176.77 square kilometers (68.25 sq mi). According to the 2010 Census, the city had a permanent population of 343,334, up from 328,809 recorded in the 2002 Census, making it Russia's largest resort city. Being part of the Caucasian Riviera, it is one of the very few places in Russia with a subtropical climate, with warm to hot summers and mild winters.

With the alpine and Nordic events held at the nearby ski resort of Rosa Khutor in Krasnaya Polyana, Sochi hosted the XXII Olympic Winter Games and XI Paralympic Winter Games in 2014, as well as the Russian Formula 1 Grand Prix from 2014 until at least 2020. It was also one of the host cities for the 2018 FIFA World Cup.

Before the whole area was conquered by Cimmerian, Scythian and Sarmatian invaders, the Zygii people lived in Lesser Abkhazia under the Kingdom of Pontus, then the Roman Empire's influence in antiquity. From the 6th to the 11th centuries, the area successively belonged to the Georgian kingdoms of Lazica and Abkhazia, who built a dozen churches within the city boundaries, the later was unified under the single Georgian monarchy in 11th-century, forming one of the Saeristavo, known as Tskhumi extending its possessions up to Nicopsis. The Christian settlements along the coast were destroyed by the invading Alans, Khazars, Mongols and other nomadic empires whose control of the region was slight. The northern wall of an 11th-century Byzantine basilica still stands in the Loo Microdistrict.

From the 14th to the 19th centuries, the region was dominated by the Abkhaz, Ubykh and Adyghe tribes, the current location of the city of Sochi known as Ubykhia was part of historical Circassia, and was controlled by the native people of the local mountaineer clans of the north-west Caucasus, nominally under the sovereignty of the Ottoman Empire, which was their principal trading partner in the Muslim world.

The coastline was ceded to Russia in 1829 as a result of the Caucasian War and the Russo-Turkish War, 1828–1829; however, the Circassians did not admit the Russian control over Circassia and kept resisting the newly established Russian outposts along the Circassian coast (Adyghe: Адыгэ хы аушу). Provision of weapons and ammunition from abroad to the Circassians caused a diplomatic conflict between the Russian Empire and the British Empire that occurred in 1836 over the mission of the Vixen.

The Russians had no detailed knowledge of the area until Baron Feodor Tornau investigated the coastal route from Gelendzhik to Gagra, and across the mountains to Kabarda, in the 1830s. In 1838, the fort of Alexandria, renamed Navaginsky a year later, was founded at the mouth of the Sochi River as part of the Black Sea coastal line, a chain of seventeen fortifications set up to protect the area from recurring Circassian resistance. At the outbreak of the Crimean War, the garrison was evacuated from Navaginsky in order to prevent its capture by the Turks, who effected a landing on Cape Adler soon after.

The last battle of the Caucasian War took place at the Godlikh river on March 18, 1864 O.S., where the Ubykhs were defeated by the Dakhovsky regiment of the Russian Army. On March 25, 1864, the Dakhovsky fort was established on the site of the Navaginsky fort. The end of Caucasian War was proclaimed at Kbaade tract (modern Krasnaya Polyana) on June 2 (21 May O.S.), 1864, by the manifesto of Emperor Alexander II read aloud by Grand Duke Michael Nikolaevich of Russia.

After the end of Caucasian War (during the period of 1864–1870) almost all Ubykhs and a major part of the Shapsugs, who lived on the territory of modern Sochi, were either killed in the Circassian Genocide or expelled to the Ottoman Empire (see Circassian Genocide). Starting in 1866 the coast was actively colonized by Russians, Armenians, Ukrainians, Belorussians, Greeks, Germans, Georgians and other people from inner Russia.

In 1874–1891, the first Russian Orthodox church, St. Michael's Church, was constructed, and the Dakhovsky settlement was renamed Dakhovsky Posad on April 13, 1874 (O.S.). In February 1890, the Sochi Lighthouse was constructed. In 1896, the Dakhovsky Posad was renamed Sochi Posad (after the name of local river) and incorporated into the newly formed Black Sea Governorate. In 1900–1910, Sochi burgeoned into a sea resort. The first resort, "Kavkazskaya Riviera", opened on June 14, 1909 (O.S.). Sochi was granted town status in 1917.

During the Russian Civil War, the littoral area saw sporadic armed clashes involving the Red Army, White movement forces, and the Democratic Republic of Georgia. As a result of the war Sochi has become Russian territory. In 1923, Sochi acquired one of its most distinctive features, a railway which runs from Tuapse to Georgia within a kilometer or two of the coastline. Although this branch of the Northern Caucasus Railway may appear somewhat incongruous in the setting of beaches and sanatoriums, it is still operational and vital to the region's transportation infrastructure.

Sochi was established as a fashionable resort area under Joseph Stalin, who had his favorite dacha built in the city. Stalin's study, complete with a wax statue of the leader, is now open to the public. During Stalin's reign the coast became dotted with imposing Neoclassical buildings, exemplified by the opulent Rodina and Ordzhonikidze sanatoriums. The centerpiece of this early period is Shchusev's Constructivist Institute of Rheumatology (1927–1931). The area was continuously developed until the demise of the Soviet Union.

Following Russia's loss of the traditionally popular resorts of the Crimean Peninsula (transferred from the Russian SFSR to the Ukrainian SSR in 1954 by Nikita Khrushchev), Sochi emerged as the unofficial summer capital of the country. In 1961, Soviet officials decided to expand the city limits by forming a Greater Sochi which extended for 140 kilometers from the southern parts of Tuapse to Adler. In July 2005, Russia submitted a successful bid for hosting the 2014 Winter Olympics in the city, spending around $51 billion in the process. Additionally, Sochi has also served as the location for the signing of many treaties, especially those between the Georgian, separatist Abkhazian, and separatist South Ossetian governing authorities.

Greater Sochi is elongated along the Black Sea coast for 145 kilometers (90 mi). Sochi is approximately 1,603 kilometers (996 mi) from Moscow. 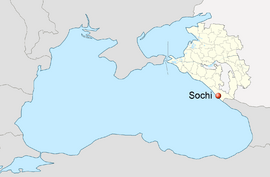 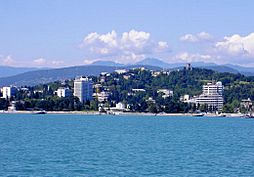 Sochi seen from the Black Sea

Black sea common dolphins with a kite-surfer off Sochi

The vast majority of the population of Sochi lives in a narrow strip along the coast and is organized in independent microdistricts (formerly settlements). The biggest of these microdistricts, from the northwest to the southeast, are Lazarevskoye, Loo, Dagomys, central Sochi (Tsentralny City District), Khosta, Matsesta, and Adler. The whole city is located on the slopes of the Western Caucasus which descend to the Black Sea and are cut by the rivers. The biggest rivers in Sochi are the Mzymta, which is in fact the longest Black Sea tributary in Russia, and the Shakhe. Other rivers include the Ashe, the Psezuapse, the Sochi, the Khosta, and the Matsesta. The Psou River makes the border with Abkhazia.

Sochi is unique among larger Russian cities as having some aspects of a subtropical resort. Apart from the scenic Caucasus Mountains, pebble and sand beaches, the city attracts vacation-goers with its subtropical vegetation, numerous parks, monuments, and extravagant Stalinist architecture. About two million people visit Greater Sochi each summer, when the city is home to the annual film festival "Kinotavr" and a getaway for Russia's elite.

All content from Kiddle encyclopedia articles (including the article images and facts) can be freely used under Attribution-ShareAlike license, unless stated otherwise. Cite this article:
Sochi Facts for Kids. Kiddle Encyclopedia.