Cheltenham also known as Cheltenham Spa, is a regency spa town and borough which is located on the edge of the Cotswolds, an Area of Outstanding Natural Beauty in Gloucestershire, England. With a motto of Salubritas et Eruditio meaning 'health and education', Cheltenham has been a health and holiday spa town resort since the discovery of mineral springs in 1716 and has a high number of internationally renowned and historic schools. 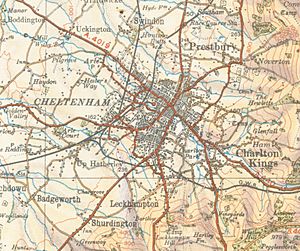 Cheltenham stands on the small River Chelt, which rises nearby at Dowdeswell and runs through the town on its way to the Severn. It was first recorded in 803, as Celtan hom; the meaning has not been resolved with certainty, but latest scholarship concludes that the first element preserves a pre-British noun cilta, 'steep hill', here referring to the Cotswold scarp; the second element may mean 'settlement' or 'water-meadow'. As a royal manor, it features in the earliest pages of the Gloucestershire section of Domesday Book where it is named Chintenha[m]. The town was awarded a market charter in 1226.

Though little remains of its pre-spa history, Cheltenham has been a health and holiday spa town resort since the discovery of mineral springs there in 1716. Captain Henry Skillicorne (1678–1763), is credited with being the first entrepreneur to recognise the opportunity to exploit the mineral springs. The retired "master mariner" became co-owner of the property containing Cheltenham's first mineral spring upon his 1732 marriage to Elizabeth Mason. Her father, William Mason, had done little in his lifetime to promote the healing properties of the mineral water apart from limited advertising and building a small enclosure over the spring. Skillicorne's wide travels as a merchant had prepared him to see the potential lying dormant on this inherited property. After moving to Cheltenham in 1738, he immediately began improvements intended to attract visitors to his spa. He built a pump to regulate the flow of water and erected an elaborate well-house complete with a ballroom and upstairs billiard room to entertain his customers. The beginnings of Cheltenham's famous tree-lined promenades and gardens surrounding its spas were first designed by Captain Skillicorne with the help of "wealthy and traveled" friends who understood the value of relaxing avenues. The beautiful walks and gardens were naturally adorned with sweeping vistas of the countryside. Soon the gentry and nobility from across the county were enticed to come and investigate the beneficial waters of Cheltenham's market town spa.

The visit of George III with the queen and royal princesses in 1788 set a stamp of fashion on the spa. The spa waters can still be sampled at the Pittville Pump Room, built for this purpose and completed in 1830; it is a centrepiece of Pittville, a planned extension of Cheltenham to the north, undertaken by Joseph Pitt, who laid the first stone 4 May 1825.

Cheltenham's success as a spa town is reflected in the railway station, which is still called Cheltenham Spa, and spa facilities in other towns that were inspired by or named after it.

Alice Liddell and Lewis Carroll were regular visitors to a house in Cudnall Street, Charlton Kings – a suburb of Cheltenham. This house was owned by Alice Liddell's grandparents, and still contains the mirror, or looking glass, that was purportedly the inspiration for Lewis Carroll's novel Through the Looking-Glass, published in 1871.

Horse racing began in Cheltenham in 1815, and became a major national attraction after the establishment of the Festival in 1902. Whilst the volume of tourists visiting the spa has declined, the racecourse attracts tens of thousands of visitors to each day of the festival each year, with such large numbers of visitors having a significant impact on the town.

In the Second World War, the United States Army Service of Supply, European Theatre of Operations established its primary headquarters at Cheltenham under the direction of Lt. Gen. John C. H. Lee, with the flats of the Cheltenham Racecourse becoming a giant storage depot for countless trucks, jeeps, tanks and artillery pieces. Most of this materiel was reshipped to the continent for and after the D-Day invasion. Lee and his primary staff had offices and took residence at Thirlestaine Hall in Cheltenham.

The first British jet aircraft prototype, the Gloster E.28/39, was manufactured in Cheltenham. Manufacturing started in Hucclecote near Gloucester, but was later moved to Regent Motors in Cheltenham High Street (now the Regent Arcade), considered a location safer from bombing during the Second World War. 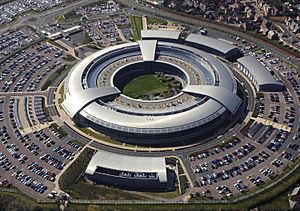 'The Doughnut', the headquarters of GCHQ

'The Doughnut', the head office of the British Government Communications Headquarters (GCHQ) is located in Cheltenham.

Cheltenham is on the edge of the Cotswolds, an Area of Outstanding Natural Beauty in the South-West region of England. The small River Chelt flows under and through the town.

Lansdown Crescent is a Regency period terrace, designed by John Buonarotti Papworth for R.W. and C. Jearrad and constructed in the 1830s. The terrace is convex, and opposite the north-eastern part stands Lansdown Court, an Italianate villa possibly designed by Papworth but more probably by the Jearrads and built about 1830.

Charlton Park is a former 72-acre (29 ha) historic park with mansion house, about a mile south-east of the town centre. From 1935 the parkland gradually became a private residential area, the main housing development taking place between 1976 and 1983. The original mansion house dated from the 13th century; alterations throughout the centuries transformed it from a medieval, timber-framed hall-house into an 18th-century brick-faced mansion in the classical style. In the 1780s the estate was emparked for deer and had magnificent Dutch-style water gardens. After 1935 the old house became part of Charlton Park Convent, and since 1987 has been part of St Edward's School.

As with the rest of the British Isles, Cheltenham experiences a maritime climate. In comparison to many other areas in Britain, Cheltenham has warm summers and mild winters. The town held the British maximum temperature record from 1990 to 2003—temperatures reached 37.1 °C (98.8 °F). The absolute minimum is −20.1 °C (−4.2 °F), set during December 1981. During a typical year, 145.6 days will report at least 1 mm of precipitation, and some 42.2 nights will record air frost. 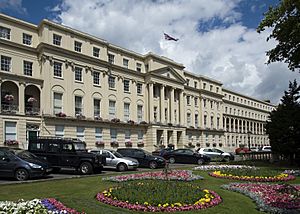 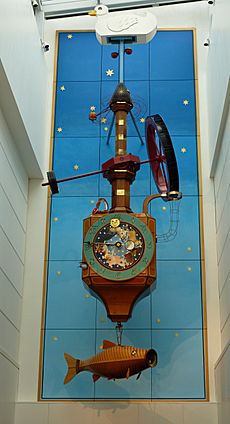 The mechanical clock in the Regent Shopping Arcade, designed by Kit Williams. The distance from the duck to the fish is 14 metres.

The town is famous for its Regency architecture and is said to be "the most complete regency town in England". Many of the buildings are listed, including the Cheltenham Synagogue, judged by Nikolaus Pevsner to be one of the architecturally "best" non-Anglican ecclesiastical buildings in Britain. Cheltenham Town Hall was built in 1902 to commemorate the coronation of King Edward VII and Queen Alexandra.

The Cheltenham Art Gallery & Museum, also called The Wilson, hosts a programme of art exhibitions running throughout the year. In 2014 many of the town's historic cultural and leisure buildings were put under the control of The Cheltenham Trust, a charity set up to manage and develop the buildings on behalf of the town. Along with The Wilson, the Trust now manages the Town Hall, the Pittville Pump Room, the Prince of Wales Stadium and Leisure @, a large fitness and swimming complex. A volunteer board of Trustees, chaired by media entrepreneur Peter Harkness, controls the Trust. The Trust's CEO is Julie Finch former director museums in Bristol.

In 2010, Cheltenham was named the UK's fifth "most musical" City by PRS for Music.

The Cheltenham Art Gallery & Museum has a notable collection of decorative arts from the era of the Arts and Crafts Movement. The collection enjoys National Designation by the Arts Council of England. The Holst Birthplace Museum contains personal belongings of the composer of The Planets, including his piano. It also includes a working Victorian kitchen and laundry, Regency drawing room and an Edwardian nursery.

Every year, Cheltenham Festivals organises music, jazz, literature and science festivals in the town, attracting names with national and international reputations in each field. Events take place at venues including the town hall, the Everyman Theatre, the Playhouse Theatre and the Pittville Pump Room.

Greenbelt, a Christian arts and music festival, and Wychwood Festival, a family-friendly folk and world music festival, were held at Cheltenham Racecourse. The town also hosts the multi-venue Walk the line festival.

Cheltenham has played host to and featured in a number of film and TV series:

The Thistle Golden Valley Hotel was used by the ITV soap opera Crossroads for outdoor location filming from 1982 to 1985.

Cheltenham has four theatres: the Everyman, the Playhouse, the Bacon and the Parabola Arts Centre.

According to 2011 estimates, the ethnic breakdown of the population of Cheltenham is as follows: 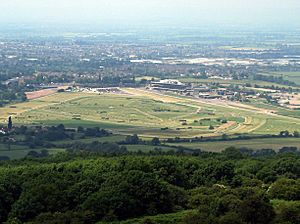 The racecourse from Cleeve Hill

Cheltenham Racecourse, in the nearby village of Prestbury, is the home of National Hunt, or jumps, racing in the UK. Meetings are hosted from October to April. The highlight of the season is the Cheltenham Gold Cup, which is normally held in the middle of March, during the Cheltenham Festival.

In rugby league university side Gloucestershire All Golds were admitted into the semi-professional Championship 1. The Cheltenham Rugby Festival is a rugby league nines event held in May.

The town has one golf course, Lilley Brook, in Charlton Kings.

Cheltenham has one of the largest croquet clubs in the country, and is home to the headquarters of the national body of the sport, the Croquet Association. The East Glos tennis, squash and women's hockey club, which was founded in 1885, is also located in the town.

Sandford Parks Lido is one of the largest outdoor pools in England. There is a 50 m (164 ft) main pool, a children's pool and paddling pool, set in landscaped gardens.

Cheltenham Festival is a significant National Hunt racing meeting, and has race prize money second only to the Grand National. It is an event where many of the best British and Irish trained horses race against each other, the extent of which is relatively rare during the rest of the season.

The festival takes place annually in March at Cheltenham Racecourse. The meeting is often very popular with Irish visitors, mostly because of that nation's affinity with horse racing, but also because it usually coincides with St. Patrick's Day, a national holiday in celebration of the patron saint of Ireland.

Large amounts of money are bet during festival week, with hundreds of millions of pounds being gambled over the four days. Cheltenham is often noted for its atmosphere, most notably the "Cheltenham roar", which refers to the enormous amount of noise that the crowd generates as the starter raises the tape for the first race of the festival. 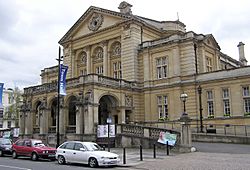 Cheltenham Town Hall, erected in 1902 to commemorate the coronation of King Edward VII and Queen Alexandra.

The Cheltenham Spa Express, once known as the "Cheltenham Flyer", is a named passenger train connecting Cheltenham with London.

The restored station at Cheltenham Racecourse is the southern terminus of the Gloucestershire Warwickshire Railway heritage railway. The Honeybourne Line is being extended to Broadway.

Cheltenham is adjacent to the M5 motorway (between Bristol and Birmingham) and its junction with the A417 to Swindon, and the A40 runs from across the M5 through the town towards Oxford and London.

National Express operate a number of coach services from Cheltenham including route 444 to London and route 222 to Heathrow and Gatwick airports.

Cheltenham was a terminus of the Gloucester and Cheltenham Tramroad.

All content from Kiddle encyclopedia articles (including the article images and facts) can be freely used under Attribution-ShareAlike license, unless stated otherwise. Cite this article:
Cheltenham Facts for Kids. Kiddle Encyclopedia.