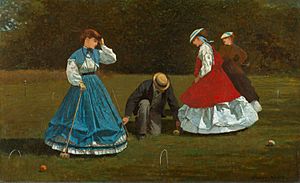 Croquet is a recreational game and, latterly, a competitive sport that involves hitting wooden or plastic balls with a mallet through hoops embedded into the grass playing arena.

The game was apparently invented in Ireland in the 1830s and taken to England as a pastime of the aristocracy in the 1850s. It may have evolved from the earlier mallet and ball game pall mall. It made its way to the United States, Australia, and France, and while never hugely popular has continued to maintain a substantial following.

Variations of the game include eXtreme Croquet and Bicycle Croquet.

All content from Kiddle encyclopedia articles (including the article images and facts) can be freely used under Attribution-ShareAlike license, unless stated otherwise. Cite this article:
Croquet Facts for Kids. Kiddle Encyclopedia.