Tewkesbury ( TYEWKS-bree) is a town and civil parish in Gloucestershire, England. It stands at the confluence of the River Severn and the River Avon, and also minor tributaries the Swilgate and Carrant Brook. It gives its name to the Borough of Tewkesbury, of which the town is the second largest settlement.

The name Tewkesbury comes from Theoc, the name of a Saxon who founded a hermitage there in the 7th century, and in the Old English language was called Theocsbury. An erroneous derivation from Theotokos enjoyed currency in the monastic period of the town's history.

The Battle of Tewkesbury, which took place on 4 May 1471, was one of the decisive battles of the Wars of the Roses.

At the 2011 UK census the town itself had a population of 10,704. If the neighbouring parishes of Wheatpieces (3,577), Northway (5,080) and Ashchurch Rural (957) are added, the figure rises to 20,318. The Tewkesbury urban area is divided in two by the north-south running M5 motorway, opened in February 1971. However, the town is generally considered as the built-up area to the immediate east and west of the M5 at junction 9, with the town centre, abbey and old town situated to the west. The close proximity of large areas of land that are prone to flooding, as evidenced by the severe floods that struck the region in July 2007, would make further expansion difficult. However, the present Borough of Tewkesbury, created on 1 April 1974, also contains a large portion of rural north Gloucestershire, extending as far as the edges of Gloucester itself and also Cheltenham, and has a present population of 81,943. 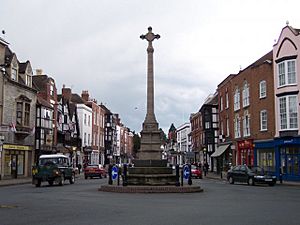 The town features many notable Medieval, Tudor buildings, but its major claim to fame is Tewkesbury Abbey, a fine Norman abbey church, originally part of a monastery, which was saved from the Dissolution of the Monasteries by King Henry VIII after being bought by the townspeople for the price of the lead on the roof to use as their parish church. Most of the monastery buildings, as well as the vineyards, were destroyed during this time. The Abbey Mill however still remains, resting upon the Mill Avon, a channel allegedly built by the monks. This channel represents one of the biggest projects in Tewkesbury's history, though the present weir dates only from the 1990s, replacing two sluice gates installed in the 1930s. The Abbey Mill is also sometimes known as "Abel Fletcher's Mill", but this is simply the name given to it in Dinah Craik's novel John Halifax, Gentleman, whose setting Norton Bury is based on Tewkesbury (see the Tewkesbury in Literature section below).

The abbey is thought to be the site of the place where the hermit Theoc once lived. The great Romanesque arch on the west front is particularly striking, and the stained glass window at that end has been restored. The monastery was founded by the Despensers as a family mausoleum, and the Despenser and Neville tombs are fine examples of small-scale late medieval stonework.

The tower is believed to be the largest Norman tower still in existence (though that at Norwich Cathedral is another strong contender). The tower once had a wooden spire which may have taken the total height of the building to as much as 260 feet (79 m), but this was blown off in a heavy storm on Easter Monday 1559; the present pinnacles and battlements were added in 1600 to give the tower a more "finished" look. The height to the top of the pinnacles is 148 feet (45 m). The abbey is thought to be the third largest church in Britain that is not a cathedral (after Westminster Abbey and Beverley Minster). From end to end it measures 331 feet (101 m), though prior to the destruction of the original Lady Chapel (also at the time of the dissolution), the total length was 375 feet (114 m). The abbey is a parish church, still used for daily services, and is believed to be the second-largest parish church in England, again, after Beverley Minster. 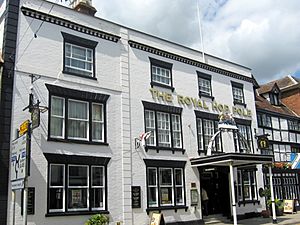 The Royal Hop Pole, mentioned in 'The Pickwick papers'

Tewkesbury claims Gloucestershire's oldest public house, the Black Bear, dating from 1308. Other notable buildings are the Royal Hop Pole Hotel in Church Street (which has recently been converted into a part of the Wetherspoons pub chain with the discovery of a former medieval banqueting hall in the structure), mentioned in Charles Dickens' The Pickwick Papers, the Bell Hotel, a large half-timbered structure opposite the Abbey gateway, and the House of the Nodding Gables in the High Street.

The Abbey Cottages, adjacent to Tewkesbury Abbey, were built between 1410 and 1412. They were restored 1967 to 1972 by the Abbey Lawn Trust, a building preservation charity. They house the John Moore Museum, residential homes and commercial offices. The John Moore Museum was established in 1980 in memory of the writer and naturalist, John Moore. The museum consists of three buildings: the main John Moore Museum, home to an extensive Natural History collection; the Merchant's House, restored to its Tudor appearance; and the Old Baptist Chapel. The Old Baptist Chapel, located off Church Street, is a timber-framed building, formally a medieval hall house dating to the 1480s. Sometime in the 17th century, it was converted for use as a Nonconformist meeting house. Including the original baptistery and pastor's room, the building is of significant historic interest. The building was restored to its 1720 appearance in the 1970s by Tewkesbury Borough Council. It was further renovated and interpreted in 2015 by the Abbey Lawn Trust and is used as a venue for a variety of cultural events. Behind the chapel is a small cemetery for those who were members of the congregation. This includes the grave of William Shakespeare-Hart, fifth great grand nephew of William Shakespeare. The cemetery is managed by Tewkesbury Borough Council.

At the Tudor House Hotel in the High Street however, although it is indeed chiefly a Tudor building, the frontage comprises artificial half-timbering attached to a brick-built façade. The local branch of Store Twenty-One (formerly Marks & Spencer and before that Iceland) was once the location of the Swan Hotel, where a balcony still exists today and from which local election results were announced.

Just to the west of the town is Thomas Telford's impressive Mythe Bridge over the River Severn, a cast-iron structure with a 170-foot span, opened in 1826. Tewkesbury's other notable bridge is the stone-built King John's Bridge over the Avon, commissioned by King John in the late 12th century as part of improvements to the main road from Gloucester to Worcester. Original stonework can still be seen on its north side; the bridge was widened in the mid-to-late 1950s to meet traffic requirements. 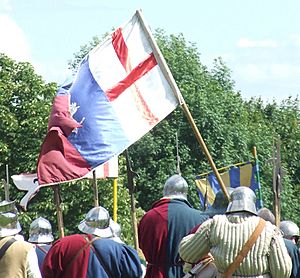 Tewkesbury is twinned with Miesbach in Bavaria, Germany.

All content from Kiddle encyclopedia articles (including the article images and facts) can be freely used under Attribution-ShareAlike license, unless stated otherwise. Cite this article:
Tewkesbury Facts for Kids. Kiddle Encyclopedia.