Winchcombe is a Cotswold town in the local authority district of Tewkesbury, in Gloucestershire, England. Its population according to the 2011 census was 4,538. 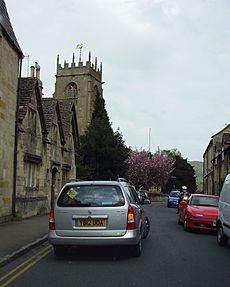 Part of the main street

The Belas Knap Neolithic long barrow on a hilltop above Winchcombe, was constructed from about 3000 BC favoured by Coenwulf; the others being Lichfield and Tamworth. Subsequently, during the 11th century, the town was briefly the county town of Winchcombeshire. The Anglo-Saxon saint St. Kenelm is believed to be buried in the town.

During the Anarchy of the 12th century, a motte-and-bailey castle was erected in the early 1140s by Roger Fitzmiles, 2nd Earl of Hereford for the Empress Matilda, although the exact site of this is unknown;. It has been suggested however, that it was to the south of St Peter's Church.

In the Restoration period, Winchcombe was noted for cattle rustling and other lawlessness, caused in part by poverty. In an attempt to earn a living, local people grew tobacco as a cash crop, despite this practice having been outlawed since the Commonwealth. Soldiers were sent in on at least one occasion to destroy the illegal crop.

In Winchcombe and the immediate vicinity can be found Sudeley Castle and the remains of Hailes Abbey, which was one of the main centres of pilgrimages in Britain due to a phial possessed by the monks said to contain the Blood of Christ. There is nothing left of the now-vanished Winchcombe Abbey. St Peter's Church in the centre of the town is noted for its grotesques.

The Michelin star restaurant 5 North Street is in Winchcombe.

Winchcombe sits on six long-distance footpaths: The Cotswold Way, the Gloucestershire Way, the Wychavon Way, St Kenelm's Trail, St Kenelm's Way, the Warden's Way and the Windrush Way. Winchcombe became a member of the Walkers are Welcome network of towns in July 2009 and now holds a walking festival every May.

A bus service connects the town to Cheltenham, Broadway, Willersey and further afield on special services. 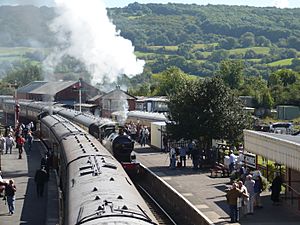 Winchcombe was once served by a railway line, a relative latecomer in British railway history, which was opened in 1906 by the Great Western Railway. The line ran from Stratford-upon-Avon to Cheltenham and was part of a main line from Birmingham to the South West and South Wales. Winchcombe railway station and most others on the section closed in March 1960. Through passenger services continued on this line until March 1968, and goods until 1976 when a derailment at Winchcombe damaged the line. It was decided not to bring the section back into use and by the early 1980s it had been dismantled. The stretch between Toddington and Cheltenham Racecourse, including Winchcombe, has since been reconstructed and reopened as a heritage railway called the Gloucestershire Warwickshire Railway. A new railway station has been erected at Winchcombe, on its original site, the building being the former station at Monmouth ((Troy) railway station). Nearby is the 693 yard (634 m) Greet Tunnel, the second longest on any preserved line in Britain.

A community radio station called Radio Winchcombe launched in April 2005 which currently broadcasts for 20 days a year (10 days every 6 months). In December 2011 it was announced that Radio Winchcombe's application to switch to broadcasting full-time had been approved by Ofcom.

All content from Kiddle encyclopedia articles (including the article images and facts) can be freely used under Attribution-ShareAlike license, unless stated otherwise. Cite this article:
Winchcombe Facts for Kids. Kiddle Encyclopedia.