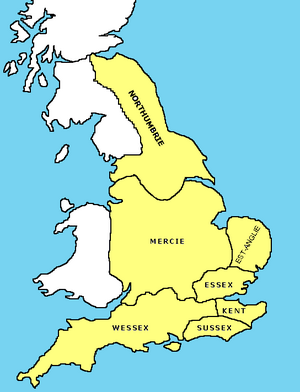 Overview map of Anglo-Saxon England in the early 9th century, on the eve of the Danish conquests.

Anglo-Saxon England is the history of England from the 5th to 11th centuries.

The Anglo-Saxons were people from Germanic tribes. They first came as migrants to southern Britain from central Europe. Anglo-Saxon history begins after the end of Roman control.

In the 5th and 6th centuries there were seven Anglo-Saxon kingdoms: Northumbria, Mercia, East Anglia, Essex, Kent, Sussex, and Wessex.

Anglo-Saxon Christianity arrived in the 7th century. Viking invasions and Danish settlers started in the 8th century. The gradual unification of England under Wessex hegemony occurred during the 9th and 10th centuries.

Anglo-Saxon England ended with the Norman conquest of England by William the Conqueror in 1066. Anglo-Saxon identity survived beyond the Norman Conquest, and slowly developed into the modern English people.

All content from Kiddle encyclopedia articles (including the article images and facts) can be freely used under Attribution-ShareAlike license, unless stated otherwise. Cite this article:
Anglo-Saxon England Facts for Kids. Kiddle Encyclopedia.