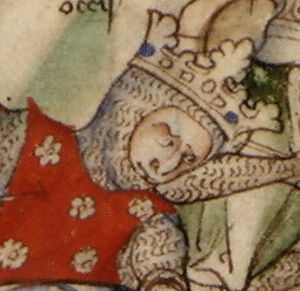 13th-century portrayal of Harald Hardrada, from The Life of King Edward the Confessor by the English chronicler Matthew Paris (c. 1200 – 1259).

Harald was King of Norway (as Harald III) from 1046 to 1066. Also, he unsuccessfully claimed the Danish throne until 1064 and the English throne in 1066. Before becoming king, Harald had spent about fifteen years in exile as a mercenary and military commander in Kievan Rus' and of the Varangian Guard in the Byzantine Empire.

When he was fifteen years old, in 1030, Harald fought with his half-brother Olaf against Cnut (Canute). Olaf sought to reclaim the Norwegian throne, which he had lost to the Danish king Cnut the Great two years before. In the battle, Olaf and Harald were defeated by forces loyal to Cnut. Harald was forced into exile to Kievan Rus' (early form of Russia). After some time in the army of Grand Prince Yaroslav the Wise, he moved on to Constantinople with his companions around 1034. In Constantinople, he commanded the Byzantine Varangian Guard.

Harald got wealthy during his time in the Byzantine Empire. He shipped the money to Yaroslav in Kievan Rus' for safekeeping. He finally left the Byzantines in 1042. He arrived back in Kievan Rus' to prepare his campaign of reclaiming the Norwegian throne. In his absence Olaf's illegitimate son Magnus the Good had got the throne. Magnus had also become king of Denmark.

In 1046, Harald joined forces with Magnus's rival in Denmark the pretender Sweyn II of Denmark, and started raiding the Danish coast. Magnus, unwilling to fight his uncle, agreed to share the kingship with Harald, since Harald in turn would share his wealth with him. The co-rule ended abruptly the next year as Magnus died, so Harald became the sole ruler of Norway.

Domestically, Harald crushed all opposition, and outlined the union of Norway under a national rule. Harald's reign was probably one of relative peace and stability, and he set up a viable coin economy and foreign trade. Probably seeking to restore Cnut's "North Sea Empire", Harald also claimed the Danish throne, and spent nearly every year until 1064 raiding the Danish coast and fighting his former ally, Sweyn. Although the campaigns were successful, he was never able to conquer Denmark.

Not long after Harald had renounced his claim to Denmark, the former Earl of Northumbria, Tostig Godwinson, brother of the English king Harold Godwinson, pledged his allegiance to Harald and invited him to claim the English throne. Harald invaded Northern England with 10,000 troops and 300 longships in September 1066, raided the coast and defeated English regional forces of Northumbria and Mercia in the Battle of Fulford near York. Although initially successful, Harald was defeated and killed in an attack by Harold Godwinson's forces in the Battle of Stamford Bridge, which wiped out almost his entire army. Modern historians have often considered Harald's death, which brought an end to his invasion, as the end of the Viking Age. The famous Anglo-Saxon Chronicle records these events.

All content from Kiddle encyclopedia articles (including the article images and facts) can be freely used under Attribution-ShareAlike license, unless stated otherwise. Cite this article:
Harald Hardrada Facts for Kids. Kiddle Encyclopedia.