Stamford Bridge is a village on the River Derwent, in the East Riding of Yorkshire, in Great Britain. It is about 7 miles (11 km) east of York and 18 miles (29 km) north of Selby.

The village sits on an old river crossing over the Derwent river. The Romans established a fort here about 70 AD. Later a settlement of the same name was here. The Battle of Stamford Bridge was fought here on 25 September 1066. The battle marked the end of the Viking era in England. 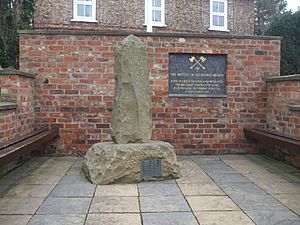 This Stone was erected to remember the Battle of Stamford Bridge when King Harold of England defeated his brother Tostig and King Hadraada of Norway on 25 September 1066.

All content from Kiddle encyclopedia articles (including the article images and facts) can be freely used under Attribution-ShareAlike license, unless stated otherwise. Cite this article:
Stamford Bridge, East Riding of Yorkshire Facts for Kids. Kiddle Encyclopedia.