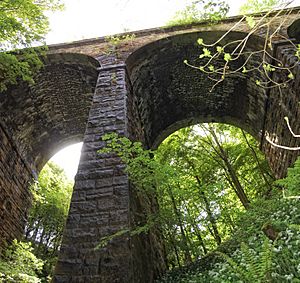 The overgrown viaduct across Lobb Ghyll on the Skipton to Ilkley Line in Yorkshire, built by the Midland Railway in 1888 and closed in 1965 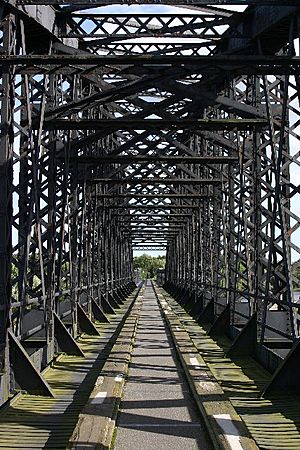 Nineteenth-century railway bridge over the River Spey, closed in 1965 and now part of the Moray Coast trail 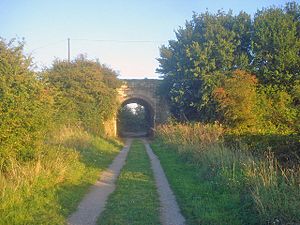 Part of the former Chippenham and Calne line, now a cycleway

The Beeching Axe was an informal name for the British government's attempt in the 1960s to control the spiralling cost of running the British railway system by closing little-used and unprofitable railway lines.

It was a reaction to the failed railway modernisation plan of the 1950s which spent huge amounts of money on buying new equipment such as new diesel and electric locomotives, without first examining the railways' role and what was actually going to be needed, let alone changing old-fashioned working practices or tackling the problem of chronic overmanning. The result of this was to plunge the railway system's finances deeply into the red.

In tune with the mood of the early 1960s, Harold Macmillan's Conservative government, with pro-road transport minister Ernest Marples, believed that the future of transport lay with roads, and that railways were a relic of the Victorian past and had little future. Some people believe that Marples' view was not totally unconnected to the fact that he had previously been a director of a major road-construction company.

In 1961 the Conservative government appointed Dr Richard Beeching (1913-1985) as the chairman of British Rail with a brief to cut the spiralling losses.

Dr Beeching believed that the railway system should be run like a business not a public service, and that if parts of the railway system which didn't pay their way—like some rural branch lines—were closed then the remaining core of the system could be restored to profitability.

He made a study of traffic on all the railway lines in the country and concluded that 80% of the traffic was carried on just 20% of the network, with much of the rest of the system carrying very little traffic indeed and operating at a loss.

In his report "The reshaping of British Railways" issued on March 27, 1963, he proposed a massive closures program. At the time the report was called the "Beeching Bombshell" or the "Beeching Axe" by the press and was hugely controversial, sparking an outcry from communities that would lose their rail services.

The report proposed that 6,000 miles of Britain's then 18,000 miles of railway system be closed (mostly rural branch and cross country lines lines) and that many other rail lines should lose their passenger services and be kept open for freight only. In addition many lesser-used stations would close, on lines that were to be kept open. The report was accepted by the government.

There was also a significant part of the Beeching Plan which proposed that British Rail electrify some major main lines and adopt containerised freight traffic instead of the outdated and uneconomic wagon load traffic. But politicians jumped at the money-saving parts of the plan and were less enthusiastic about the parts which cost money, although some of them were adopted, for example the electrification of the West Coast Main Line.

Contrary to popular belief, Beeching did not start the rail closures, as a number of rail closures had occurred during the 1950s. Between 1950 and 1963 around 3000 miles of track had already been closed, but post-Beeching the process was speeded up and dramatically expanded.

Not all of the railway lines listed for closure were closed: some were kept open for a variety of reasons, some of which were political. For example the railway lines through the Scottish Highlands, although uneconomic, were kept open due in part to pressure from the powerful Highland lobby, and some lines may have been kept open because they passed through marginal constituencies.

Some lines listed for closure were kept open because the local roads weren't capable of absorbing the traffic that would be transferred from the railway if it closed.

So there are still a fair number of rural railway lines still in existence on the British Railway system although far fewer than there were before Beeching.

Overall, 2,128 stations were closed on lines that were kept open. As well as minor railway lines, a few major intercity railway lines were closed as well, most notably the Great Central Railway which linked London to the north of England.

In 1964 Dr Beeching issued a second report known as "The Development of the Major Railway Trunk Routes" widely known as "Beeching II" which went even further than the first report. It proposed essentially that all railway lines other than major intercity routes and important commuter lines around big cities be closed. If the report had been implemented the railway system would have been cut to just 7,000 miles, leaving Britain with little more than a skeleton railway system, with large parts of the country entirely devoid of railways.

The report was rejected by the government. Dr Beeching resigned in 1965.

Although Dr Beeching was only partially responsible for the rail closures, (politicians were ultimately responsible) his name has become synonymous with them ever since.

In 1964 a new Labour government was elected with prime minister Harold Wilson. During the election campaign Labour promised to halt the rail closures if elected. But once elected they quickly backtracked on this promise and the closures continued until the end of the decade.

However in 1965 Barbara Castle was appointed transport minister, and she set about looking at the county's transport problems as a whole. Mrs Castle decided that at least 11,000 route miles of "basic railway" would be needed for the foreseeable future, and that the railway system should be stabilised at around this size.

It was also becoming increasingly clear towards the end of the 1960s, that the rail closures were not producing the promised savings, and were failing to bring the rail system out of deficit, and were unlikely ever to do so.

Barbara Castle stipulated that some rail services which could not pay their way, but had a valuable social role should be subsidised. However by the time the legislation allowing this was introduced in 1968 many such services and railway lines which would have qualified for subsidies had already been closed or removed, so the impact was not that large. However a number of branch lines were saved by this legislation.

The closures failed in their central purpose of restoring the railways to profitability, with the promised savings failing to materialise. This was mainly because the branch lines acted as feeders to the main lines, and this feeder traffic was lost when the branches closed—in turn meaning less traffic for and worsening the finances of the main lines.

The closures were brought to a halt in the early 1970s when it became apparent that they weren't achieving anything useful, and that the benefit of the small amount of money saved by closing railways was outweighed by the pollution and congestion caused by increasing reliance on cars which followed.

The last major railway closure to occur was of a 80 mile long main line between Carlisle and Edinburgh called the Waverly Route which closed in 1969; plans have since been made to re-open this line. Today Britain's railways like nearly every other railway system in the world still run at a deficit.

In the early 1980s under the government of Margaret Thatcher the spectre of more Beeching-style cuts was for a short while raised again. In 1983 a civil servant called David Serpell, who had worked with Dr Beeching, made the "Serpell Report" which called for more rail closures. It was met with fierce resistance from many quarters, and the report was quickly abandoned.

Most commentators now agree that the Beeching plan went too far. Although some of the closures were justifiable, with hindsight many of Beeching's cuts seem foolish and short sighted, and many are now being bitterly regretted.

Supporters of the Beeching cuts believe that they were a necessary emergency response to save the railway network from financial disaster, and that if they hadn't taken place, a far bigger programme of cuts would have been necessary later on.

One of the major criticisms made of the Beeching report was that it failed to take into account future trends like population growth and greater demand for travel. So for instance the population of many of the towns which had their railways closed in the 1960s has grown significantly since, leaving the towns more in need of their rail links. Unfortunately the trackbeds of many closed railways have been built over so it would be difficult to re-open.

A modest number of railway closures have been reversed in recent years and quite a number of closed stations have re-opened, and passenger services restored on lines where they had been removed. Several lines have also reopened as heritage railways - see List of British heritage and private railways.

All content from Kiddle encyclopedia articles (including the article images and facts) can be freely used under Attribution-ShareAlike license, unless stated otherwise. Cite this article:
Beeching cuts Facts for Kids. Kiddle Encyclopedia.