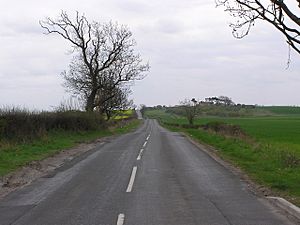 Cade's Road near Middleton One Row.

Cade's Road is a postulated Roman Road in north-east England. It is named after John Cade of Durham, an 18th-century antiquarian who in 1785 proposed its existence and possible course from the Humber Estuary northwards to the River Tyne, a distance of about 100 miles (160 km). Although evidence exists for such a road on some parts of the proposed route, there is still some doubt regarding its exact course. The road's Roman name is unknown.

From the Humber to the Tees

Cade's Road began at Brough where there was a ferry, a Roman fort and civilian settlement (Petuaria) alongside a major Celtic settlement. The road ran northwards through Thorpe le Street and Market Weighton, before gradually turning westwards (possibly following the line of another Roman road) until it reached York (Roman Eboracum). From York it continued northwards to Thornton-le-Street near Thirsk and on to cross the River Tees (on a stone bridge now gone, but stones of which are incorporated into local buildings) near Middleton St George and Middleton One Row, where 'Pounteys Lane' is possibly named after the Roman Pons Tees (Bridge of Tees).

From the Tees to the Tyne

From the Tees the road heads north through Sadberge and then Great Stainton (also known as Stainton-le-Street) near Sedgefield. The route of the road in the Durham area is unknown, but it is thought the road passed east of Durham City, crossing the River Wear at Kepier. The road ran past the Roman fort of Concangis, located at Chester-le-Street. Concangis is the only known Roman fort on the road between York and Newcastle. From Concangis the road headed north through Birtley to Wrekenton, once a village but now a suburb of Gateshead. From Wrekenton, a branch road, known as the Wrekendyke, headed north-east to the Roman fort and harbour of Arbeia at South Shields. It has been conjectured that the site of a Roman fort exists on the golf course at Wrekenton, but this has never been confirmed. Cade’s Road continued north from Wrekenton along Gateshead High Street and crossed the Tyne over the Roman bridge of Pons Aelius (Newcastle upon Tyne). It is not believed that the road continued north of Hadrian's Wall.

All content from Kiddle encyclopedia articles (including the article images and facts) can be freely used under Attribution-ShareAlike license, unless stated otherwise. Cite this article:
Cade's Road Facts for Kids. Kiddle Encyclopedia.