Brough is a small town in the civil parish of Elloughton-cum-Brough in the East Riding of Yorkshire, England. Brough is situated on the northern bank of the Humber Estuary, approximately 12 miles (19 km) west of Hull city centre. Brough has a long association with BAE Systems - founded by Robert Blackburn in 1916.

The town was known as Petuaria during the Roman period, and served as the capital of the Celtic tribe of the Parisi. Petuaria marked the southern end of the Roman road known now as Cade's Road which ran roughly northwards for a hundred miles to Pons Aelius (modern day Newcastle upon Tyne).

Brough was created a town by the Archbishop of York in 1239, granted the same liberties as Beverley. There is no record of these liberties having been employed, and the settlement operated as a village for further centuries.

The town is significant for its association with the highwayman Dick Turpin. About June 1737 Turpin boarded at the Ferry Inn at Brough, under the alias of John Palmer (or Parmen). Turpin travelled between and resided in Brough, until his capture and execution for horse theft in 1739.

The town has a population of approximately 7,000. Over the past couple of years there has been a shift in the socio-economic group of people living in Brough because of improved rail links and new housing developments. This change has brought more money into the area.

Brough has a range of shops and takeaways, and two supermarkets: Morrisons and Sainsbury's Local. There are two dentists, two vets, hairdressers, a medical centre, a private hearing aid audiologist, a post office, a cards and gifts outlet, a pet shop and branches of Barclays and TSB banks. Brough has three public houses. The Ferry Inn is the documented home of highwayman Dick Turpin, and was the place where he was arrested 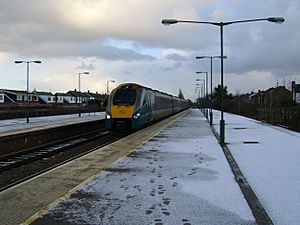 The town is served by Brough railway station on the Hull to Selby and Doncaster railway line. Direct rail services to London are provided by First Hull Trains and Virgin Trains East Coast. Other services are TransPennine Express trains running west to Leeds, Manchester Piccadilly, Liverpool, and Northern to York, Doncaster and Sheffield. All east-bound trains run to Hull: some then run north to Beverley, Driffield, Bridlington, Filey and Scarborough.

Most local bus services are provided by East Yorkshire Motor Services and run mainly to Hull. There are daily Stagecoach in Hull services to Leeds. National Express also stop at Brough. 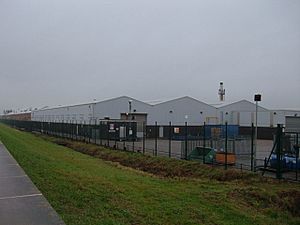 BAE Systems, Brough, manufactured the Hawk Advanced Jet Trainer aircraft at Brough Aerodrome. BAE provided apprenticeships to local school leavers. The runway at the site was re-opened for a while for occasional use solely by Hawk aircraft taking off after manufacture to transfer by air to Warton near Preston in Lancashire for final flight testing and painting though the former Air Traffic Control building has now been transformed into the Brough Business Centre.

On 3 April 2008 BAE Systems announced it would be losing 450 jobs from the Brough site.

On 1 March 2012 BAE Systems announced it would be ending manufacturing at its site in Brough with 845 employees to be made redundant. There are now proposals to build over much of the airfield - including the runway.

All content from Kiddle encyclopedia articles (including the article images and facts) can be freely used under Attribution-ShareAlike license, unless stated otherwise. Cite this article:
Brough, East Riding of Yorkshire Facts for Kids. Kiddle Encyclopedia.