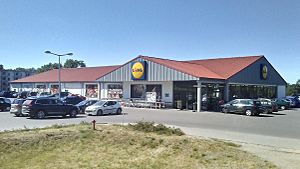 Lidl Stiftung & Co. KG is a German food retail company. It is an international enterprise with independent national companies almost everywhere in Europe. The company owns more than 10,000 stores. 3,000 of these stores are in Germany alone, making Germany Lidl's biggest national market.

The Lidl & Schwarz Grocery Wholesale company was founded in Germany in the 1930s.

The first Lidl stores were opened in 1973, during the 1990s Lidl started to open stores outside Germany and today Lidl stores can be found in nearly every country in Europe. Lidl started its foreign expansion with entering France in 1988. The first store in the United Kingdom was opened in 1994, and now there are more than 380 stores in the UK.

Lidl supermarkets and Kaufland hypermarkets are part of the Schwarz Group which is one of the largest grocery retailers in Europe. It is based in Neckarsulm, Germany.

All content from Kiddle encyclopedia articles (including the article images and facts) can be freely used under Attribution-ShareAlike license, unless stated otherwise. Cite this article:
Lidl Facts for Kids. Kiddle Encyclopedia.