Bodmin (Cornish: Bosvena) is a civil parish and major town in Cornwall, England, United Kingdom. It is situated south-west of Bodmin Moor.

The extent of the civil parish corresponds fairly closely to that of the town so is mostly urban in character. It is bordered to the east by Cardinham parish, to the southeast by Lanhydrock parish, to the southwest and west by Lanivet parish, and to the north by Helland parish.

Bodmin had a population of 12,778 (2001 census). This population had increased to 14,736 at the 2011 Census. It was formerly the county town of Cornwall until the Crown Courts moved to Truro which is also the administrative centre (before 1835 the county town was Launceston). Bodmin was in the administrative North Cornwall District until local government reorganisation in 2009 abolished the District (see also Cornwall Council). The town is part of the North Cornwall parliamentary constituency, which is represented by Scott Mann MP.

Bodmin Town Council is made up of sixteen councillors who are elected to serve a term of four years. Each year, the Council elects one of its number as Mayor to serve as the town's civic leader and to chair council meetings.

Situation and origin of the name

Bodmin lies in the east of Cornwall, south-west of Bodmin Moor. It has been suggested that the town's name comes from an archaic word in the Cornish language "bod" (meaning a dwelling; the later word is "bos") and a contraction of "menegh" (monks). The "monks' dwelling" may refer to an early monastic settlement instituted by St. Guron, which St. Petroc took as his site. Guron is said to have departed to St Goran on the arrival of Petroc.

The hamlets of Cooksland, Dunmere and Turfdown are in the parish.

St. Petroc founded a monastery in Bodmin in the 6th century and gave the town its alternative name of Petrockstow. The monastery was deprived of some of its lands at the Norman conquest but at the time of Domesday still held eighteen manors, including Bodmin, Padstow and Rialton. Bodmin is one of the oldest towns in Cornwall, and the only large Cornish settlement recorded in the Domesday Book in 1086. In the 15th century the Norman church of St Petroc was largely rebuilt and stands as one of the largest churches in Cornwall (the largest after the cathedral at Truro). Also built at that time was an abbey of canons regular, now mostly ruined. For most of Bodmin's history, the tin industry was a mainstay of the economy.

The name of the town probably derives from the Cornish "Bod-meneghy", meaning "dwelling of or by the sanctuary of monks". Variant spellings recorded include Botmenei in 1100, Bodmen in 1253, Bodman in 1377 and Bodmyn in 1522. The Bodman spelling also appears in sources and maps from the 16th and 17th centuries,

An inscription on a stone built into the wall of a summer house in Lancarffe furnishes proof of a settlement in Bodmin in the early Middle Ages. It is a memorial to one "Duno[.]atus son of Me[.]cagnus" and has been dated from the 6th to 8th centuries. 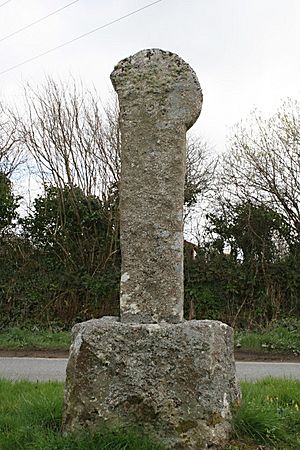 Arthur Langdon (1896) records three Cornish crosses at Bodmin; one was near the Berry Tower, one was outside Bodmin Gaol and another was in a field near Castle Street Hill. There is also Carminow Cross at a road junction southeast of the town.

The Black Death killed half of Bodmin's population in the mid 14th century (1,500 people).

Bodmin was the centre of three Cornish uprisings. The first was the Cornish Rebellion of 1497 when a Cornish army, led by Michael An Gof, a blacksmith from St. Keverne and Thomas Flamank, a lawyer from Bodmin, marched to Blackheath in London where they were eventually defeated by 10,000 men of the King's army under Baron Daubeny. Then, in the autumn of 1497, Perkin Warbeck tried to usurp the throne from Henry VII. Warbeck was proclaimed King Richard IV in Bodmin but Henry had little difficulty crushing the uprising. In 1549, Cornishmen, allied with other rebels in neighbouring Devon, rose once again in rebellion when the staunchly Protestant Edward VI tried to impose a new Prayer Book. The lower classes of Cornwall and Devon were still strongly attached to the Catholic religion and again a Cornish army was formed in Bodmin which marched across the border into Devon to lay siege to Exeter. This became known as the Prayer Book Rebellion. Proposals to translate the Prayer Book into Cornish were suppressed and in total 4,000 people were killed in the rebellion.

The Borough of Bodmin was one of the 178 municipal boroughs which under the auspices of the Municipal Corporations Act 1835 was mandated to create an electable council and a Police Watch Committee responsible for overseeing a police force in the town. The new system directly replaced the Parish Constables that had policed the borough since time immemorial and brought paid, uniformed and accountable law enforcement for the first time. Bodmin Borough Police was the municipal police force for the Borough of Bodmin from 1836 to 1866. The creation of the Cornwall Constabulary in 1857 put pressure on smaller municipal police forces to merge with the county. The two-man force of Bodmin came under threat almost immediately, but it would take until 1866 for the Mayor of Bodmin and the Chairman of the Police Watch Committee to agree on the terms of amalgamation. After a public enquiry, the force was disbanded in January 1866 and policing of the borough was deferred to the county from thereon.

The song "Bodmin Town" was collected from the Cornishman William Nichols at Whitchurch, Devon, in 1891 by Sabine Baring-Gould who published a version in his A Garland of Country Song (1924).

Bodmin Jail, operational for over 150 years but now a semi-ruin, was built in the late 18th century, and was the first British prison to hold prisoners in separate cells (though often up to ten at a time) rather than communally. Over fifty prisoners condemned at the Bodmin Assize Court were hanged at the prison. It was also used for temporarily holding prisoners sentenced to transportation, awaiting transfer to the prison hulks lying in the highest navigable reaches of the River Fowey. Also, during the First World War the prison held some of Britain's priceless national treasures including the Domesday Book, the ring and the Crown Jewels of the United Kingdom. 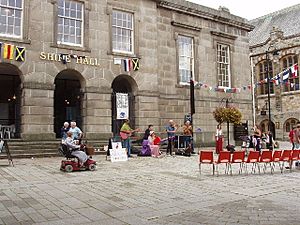 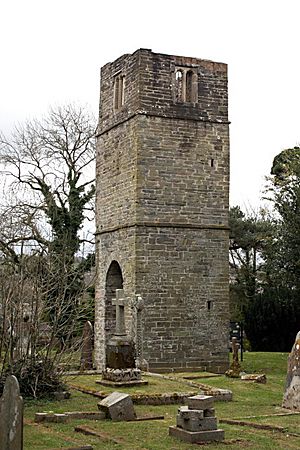 Berry Tower, all that remains of the Chapel of the Holy Rood 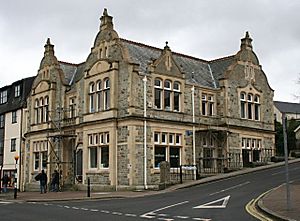 Other buildings of interest include the former Shire Hall, now a tourist information centre, and Victoria Barracks, formerly depot of the now defunct Duke of Cornwall's Light Infantry and now the site of the regimental museum. It includes the history of the regiment from 1702, plus a military library. The original barracks house the regimental museum which was founded in 1925. There is a fine collection of small arms and machine guns, plus maps, uniforms and paintings on display.

There is a sizable single storey Masonic Hall in St Nicholas Street, which is home to no less than seven Masonic bodies.

Bodmin Beacon Local Nature Reserve is the hill overlooking the town. The reserve has 83 acres (33.6 ha) of public land and at its highest point it reaches 162 metres with the distinctive landmark at the summit. The 44-metre tall monument to Sir Walter Raleigh Gilbert was built in 1857 by the townspeople of Bodmin to honour the soldier's life and work in India.

In 1966, the "Finn VC Estate" was named in honour of Victoria Cross winner James Henry Finn who once lived in the town. Arthur Langdon (1896) records six Cornish crosses in the parish of which the finest is at Carminow. An ornate granite drinking bowl which serves the needs of thirsty dogs at the entrance to Bodmin’s Priory car park was donated by Prince Chula Chakrabongse of Thailand who lived at Tredethy. 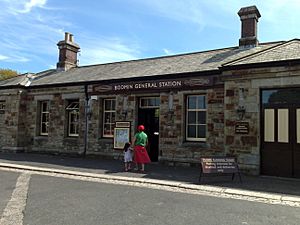 Bodmin Parkway railway station is served by main line trains and is situated on the Cornish Main Line about 3½ miles (5½ km) south-east from the town centre. A heritage railway, the Bodmin and Wenford Railway, runs from Bodmin Parkway station via Bodmin General railway station to Boscarne Junction where there is access to the Camel Trail. The bus link to Bodmin, Wadebridge and Padstow starts from outside the main entrance of Bodmin Parkway.

Bus and coach services connect Bodmin with other districts of Cornwall and Devon.

The Royal Cornwall Golf Club (now defunct) was located on Bodmin Moor. It was founded in 1889. The club disbanded following WW2.

There is an active running club: Bodmin RoadRunners.

W. H. Pascoe’s 1979 A Cornish Armory gives the arms of the priory and the monastery and the seal of the borough.

On Halgaver Moor (Goats' Moor) near Bodmin there was once an annual carnival in July which was on one occasion attended by King Charles II. Halgaver is in the parish of Lanhydrock.

Bodmin Riding, a horseback procession through the town, is a traditional annual ceremony.

'Beating the bounds' and 'hurling'

In 1865–66 William Robert Hicks was mayor of Bodmin, when he revived the custom of Beating the bounds of the town. He was — according to the Dictionary of National Biography — a very good man of business. This still takes place more or less every five years and concludes with a game of Cornish hurling. Hurling survives as a traditional part of beating the bounds at Bodmin, commencing at the close of the 'Beat'. The game is organised by the Rotary club of Bodmin and was last played in 2015. The game is started by the Mayor of Bodmin by throwing a silver ball into a body of water known as the "Salting Pool". There are no teams and the hurl follows a set route. The aim is to carry the ball from the "Salting Pool" via the old A30, along Callywith Road, then through Castle Street, Church Square and Honey Street to finish at the Turret Clock in Fore Street. The participant carrying the ball when it reaches the turret clock will receive a £10 reward from the mayor. In 2015, beating of the bounds and Cornish hurling took place at Bodmin 8 April organised by the Rotary club of Bodmin.

All content from Kiddle encyclopedia articles (including the article images and facts) can be freely used under Attribution-ShareAlike license, unless stated otherwise. Cite this article:
Bodmin Facts for Kids. Kiddle Encyclopedia.