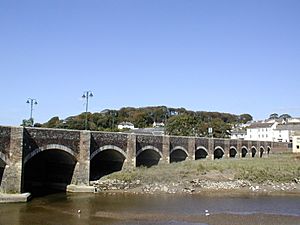 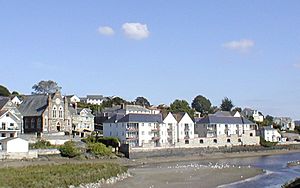 Looking towards the Methodist church from the bridge

Wadebridge ( Cornish: Ponswad) is a town and civil parish in north Cornwall, England, United Kingdom. The town straddles the River Camel five miles (eight kilometres) upstream from Padstow. The permanent population was 6,222 in the census of 2001, increasing to 7,900 in the 2011 census. There are two electoral wards in the town (East and West). Their total population is 8,272.

Originally known as Wade, it was a dangerous fording point across the river until a bridge was built here in the 15th century, after which the name changed to its present form. The bridge was strategically important during the English Civil War, and Oliver Cromwell went there to take it. Since then, it has been widened twice and refurbished in 1991.

Wadebridge was served by a railway station between 1834 and 1967; part of the line now forms the Camel Trail, a recreational route for walkers, cyclists and horse riders. The town used to be a road traffic bottleneck on the A39 road until it was bypassed in 1991, and the main shopping street, Molesworth Street, is now pedestrianised.

The town has a secondary school where several notable sports-people were educated. The Royal Cornwall Show is a three-day agricultural show held at the nearby Royal Cornwall Showground every June, and the 5-day Cornwall Folk Festival takes place around the August Bank Holiday.

The initial settlement of Wade (the name of Wadebridge before the bridge was built) came about due to a ford in the River Camel (Camel probably meaning "crooked one"). The early crossing had a chapel on each side of the river, "Kings" chapel on the north side and "St Michael's" on the south side. People would pray for a safe crossing at one of the chapels before wading across at low tide, once they had made it the other side they would give thanks to God in the other chapel. In 1312 a licence was granted for a market at Wade.

At some time the ford was supplemented by a ferry until the Reverend Thomas Lovibond (the vicar of Egloshayle) became distressed at the number of humans and animals that died during the crossing of the River Camel so he planned the building of a bridge which was completed in 1468. Wade was now known as Wadebridge.

The bridge was a strategic position in the English Civil War as in 1646 Oliver Cromwell came with 500 Dragoons and 1,000 horsemen to take the bridge. When the bridge was first completed tolls were charged for its maintenance. In 1853 it was widened from 3 to 5 metres (9.8 to 16.4 ft). A second widening took place in 1952 and then in 1963 it was again widened taking it to 12 metres (39 ft). In 1994 the bridge underwent a refurbishment to change the stone in the pavement and to create a cycle track.

A serious outbreak of typhoid in 1897 caused by contamination of drinking water led to Wadebridge having its own town council as decisive action had to be taken for proper water supplies and disposal of sewage effluent.

The Bodmin and Wadebridge Railway from Wadebridge to Wenfordbridge with branch lines to Bodmin and Ruthernbridge was built at a cost of £35,000 following a study commissioned in 1831 by local landowner Sir William Molesworth of Pencarrow. The line was intended to carry sand from the Camel Estuary to inland farms for use as fertiliser. It was opened on 30 September 1834 with the locomotive Camel pulling a train load of 400 passengers (one of the first railways in Britain to carry passengers). When the company ordered its second locomotive it came with a name plate already affixed. It had been named the Elephant as the makers had failed to realise that the first engine had been named after the river and not an animal.

The last passenger train left Wadebridge railway station in 1967 following railway cutbacks. The railway has been transformed into the Camel Trail, and the Bodmin and Wenford Railway heritage railway runs on part of the route. Oliver Bulleid designed his range of light pacific which are ether named after Second World War squadrons or towns in the west country one such loco is 34007 Wadebridge which is preserved at the Mid Hants Railway

Wadebridge was the highest navigable point on the River Camel providing the main trade route before the building of the railway, and coasters would bring goods from Bristol and coal from South Wales. Timber was also imported from the Baltic, while stone from inland was sent to destination throughout England. The first locomotives used on the railway were also imported through the quay, being manufactured by Neath Abbey Ironworks, and the railway initially linked with river traffic well, having been designed to distribute sand from the river to the local farms. This commodity, brought up from Padstow in barges, had previously been taken as far as Michaelstow and Blisland.

In 1880 there were quays on both sides of the river below the bridge, that on the west bank being served by the railway. There was also a "sand dock" constructed upstream of the bridge at the point where the Treguddick Brook (Polmorla Brook) flows into the River Camel, although this had been filled in by 1895

In the 1900s vessels such as the M.V. Florence brought cargos such as slag (for fertiliser), grain and coal. Flour was also a regular cargo brought from Ranks at Avonmouth. However, in the 1950s the river silted badly so that the ketch Agnes was possibly the last vessel to bring cargo to Wadebridge in 1955.

In 1877, after cracks appeared in the rock on which the Eddystone Lighthouse was positioned, a new lighthouse was commissioned from James Nicholas Douglass. Granite quarried from De Lank quarry was brought down to Wadebridge where stonemasons dovetailed each segment of stone not only to each other but also to the course above and below. As each layer was completed and checked to fit with the layer above, it was sent out to the Eddystone rocks by sea. The lighthouse was completed in 1882. This resulted in the road where the masons worked being called Eddystone Road.

The town straddles the River Camel five miles (eight kilometres) upstream from Padstow the town centre being on the left bank of the river.

For many years Wadebridge was a traffic-congested town (through which the route of the A39 trunk road passed) but in 1991 the Wadebridge bypass was opened together with the Egloshayle bypass causing the two settlements to regain much of their former charm. The main shopping street in Wadebridge (Molesworth Street) has subsequently been pedestrianized through construction of an inner link road, allowing traffic-free shopping.

On St Swithin's day 1965 there was a flood in Wadebridge town after five and a half inches of rain fell in four and a half hours around high tide. The Swan Hotel on The Platt was flooded to a depth of one and a half feet. 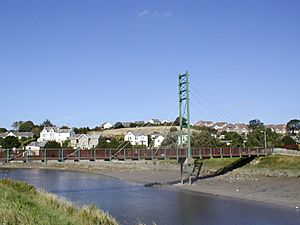 The Molesworth Arms is one of the oldest Inns in Wadebridge. Previously known as The Fox, The King's Arms and The Fountain, this coaching Inn got its current name in 1817.

There is a strong calendar of annual events in and around Wadebridge.

Since 2014, this has started with the mid-May MayPlay festival, a weekend of free children's activities.

The Big Lunch, organised by the local chamber of commerce, is a free street party in the pedestrianised part of Molesworth St in the centre of Wadebridge, where around 500–750 people get together to share food, chat, and enjoy music and other entertainment. The idea grew out of a project by the Eden Project, and was started by a former local councillor, Harriet Wild. In 2012 it also served as a celebration of the Queen's Jubilee.

Later in June, the Wadebridge Lions organise a beer festival, with brews from across Cornwall, and plenty of live music.

July sees the Rock Oyster Festival on fields on the north side of the Camel River. Oysters are, of course, on the menu, along with some great bands from the local area, across the South West and further afield.

Wadebridge Carnival is held annually in August, with a Carnival Queen. In August there is the Eglos Craft Fayre at Egloshayle Church, and the Cornwall Folk Festival, held over the Bank Holiday. The likes of folk stars such as John Renbourn, Martyn Carthy and Dave Swarbrick rub shoulders with Cornish bands, and blue legend Wiz Jones is the festival's president.

Depending on the tides, the Camel River Festival is held around August or September. The main attraction is a set of raft races on the Camel River, with bar, food, stalls and more live music.

In November the Prime Stock Show and the Garden Produce Association and Chrysanthemum Show are held.

A footbridge called the Challenge Bridge links the Egloshayle playing fields to the Jubilee fields on the other side of the river. The bridge was constructed in 1991 by Anneka Rice and her team for the TV series "Challenge Anneka". Locally, the bridge is known as Anneka's Bridge, but its real name is the Bailey Bridge.

The newspaper is a local edition of the weekly Cornish Guardian.

The town is twinned with Langueux (Langaeg) in Brittany, France.

In April 2013 Wadebridge was short-listed as one of Britain's top eco-towns and is home to Wadebridge Renewable Energy Network a grass roots enterprise aiming to make the town the first solar powered and renewable energy powered town in the UK.

The town has two primary schools which have academy status, Wadebridge Primary Academy which OfSTED graded as a ‘GOOD’ school in November 2012 and St. Breock Primary School. There is also a Secondary School, Wadebridge School .

There are two health care practices: the Wadebridge and Camel Estuary Practice and the Bridge Medical Centre. There has been a group practice in Wadebridge since the early 20th century; many of the early doctors had their surgeries operating from their homes.

The Camel estuary offers a range of water sports, including sailing, water skiing, windsurfing, surfing and kite surfing. Golf courses close by include Trevose and Saint Enodoc and St Kew.

The gentleman scientist and surgeon Sir Goldsworthy Gurney, who invented the Bude-Light, lived in Wadebridge from 1814 to 1820. A street (Goldsworthy Way) has been named after him. Francis Hurdon (1834–1914), a prominent figure in Canadian politics, was educated in the town.

In media, Michael White, journalist, associate editor and former political editor of The Guardian was born here in 1945. Andrew Ridgeley, member of the pop music duo, Wham! and his partner Keren Woodward, from the group Bananarama, lived in a converted farmhouse near the town.

Sergeant Steven Roberts, the first soldier to die in the 2003 invasion of Iraq, was born in Wadebridge.

In sport, Olly Barkley, the England rugby union international player, was raised in the town, as was Michaela Breeze, the Commonwealth weightlifting champion. Both were educated at Wadebridge School, as was Annabel Vernon, the 2007 World Rowing Champion Women's Quad Sculls.

All content from Kiddle encyclopedia articles (including the article images and facts) can be freely used under Attribution-ShareAlike license, unless stated otherwise. Cite this article:
Wadebridge Facts for Kids. Kiddle Encyclopedia.