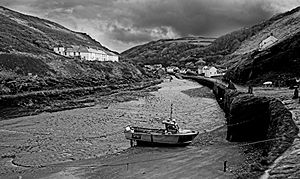 Boscastle is a village and fishing port on the north coast of Cornwall, United Kingdom, and 14 miles (23 km) south of Bude and 5 miles (8 km) north-east of Tintagel.

The name of the village derives from Bottreaux Castle, a 12th-century fortress, of which little survives. There is no church in Boscastle but there are churches at Forrabury and Minster. Boscastle harbour is a natural inlet protected by two stone harbour walls built in 1584 by Sir Richard Grenville. The oldest part of Boscastle surrounds the harbour; more modern residential building extends up the valleys of the Rivers Valency and Jordan.

A flash flood on 16 August 2004, caused extensive damage to the village. Residents were trapped in houses and elsewhere as the roads turned into rivers. In the largest peacetime rescue operation ever launched in the UK, 91 people were rescued and there were no deaths.

All content from Kiddle encyclopedia articles (including the article images and facts) can be freely used under Attribution-ShareAlike license, unless stated otherwise. Cite this article:
Boscastle Facts for Kids. Kiddle Encyclopedia.