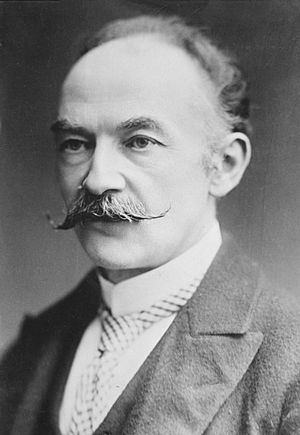 Thomas Hardy OM (2 June 1840 – 11 January 1928) was an English novelist and poet. In the U.K. Hardy is generally thought to be one of the greatest figures in English literature. He lived in the Victorian era.

Thomas Hardy was born in Upper Bockhampton near Dorchester, Dorset. His father was a stonemason. His mother had read a lot. She added to his formal education. Hardy trained as an architect in Dorchester before moving to London to get a job. He won prizes from the Royal Institute of British Architects and the Architectural Association.

Hardy wrote a small number of novels which earned him a high reputation in his lifetime. These include Tess of the d'Urbervilles, The Mayor of Casterbridge and Far from the Madding Crowd. After the publication of Jude the Obscure in 1895 Hardy gave up novel writing but continued to write poetry including an epic poem called The Dynasts. Hardy set his novels in South West England, calling it 'Wessex'. He invented names for the towns, e.g. "Casterbridge" is Dorchester in Dorset. Hardy died in Dorchester. His ashes are buried in Westminster Abbey.

All content from Kiddle encyclopedia articles (including the article images and facts) can be freely used under Attribution-ShareAlike license, unless stated otherwise. Cite this article:
Thomas Hardy Facts for Kids. Kiddle Encyclopedia.