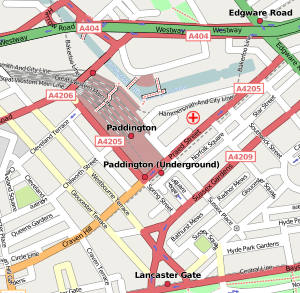 The site is old. It has been as the London end of the Great Western Railway and its successors since 1838. Much of the current mainline station dates from 1854, and was made by Isambard Kingdom Brunel. The site was first served by Underground trains in 1863, and was the first western end point of the Metropolitan Railway, the world's first underground railway.

The station has been made better not long ago. It now has an extra job as the London end point for the Heathrow Express airport service. Paddington is in Travelcard Zone 1.

There are also trains to Slough, Ealing, Heathrow Airport and Maidenhead.

Two trains from Paddington go to Heathrow Airport. The Heathrow Express travels, and doesn't stop, at a high fare. The Heathrow Connect takes the same line but, calls at most stations.

Below are the lines and main stations on the line:

The National Rail part is named London Paddington, a name used outside London, but not by many people who live there. Parts of the station, like the main train shed, were built in 1854 by Isambard Kingdom Brunel as the London end point for the Great Western Railway (GWR). Today, it is one of 18 UK railway stations looked after by Network Rail.

Paddington has 14 end platforms, numbered 1 to 14. Platforms 1 to 8 are below the oldest three parts of Brunel's 1854 train shed, and platforms 9 to 12 are below the fourth part. Platforms 13 and 14 are within the Metropolitan Railway's old Bishop's Road station to the north-west. There are two through platforms, 15 and 16, used by the London Underground's Hammersmith & City and Circle lines.

All content from Kiddle encyclopedia articles (including the article images and facts) can be freely used under Attribution-ShareAlike license, unless stated otherwise. Cite this article:
Paddington station Facts for Kids. Kiddle Encyclopedia.