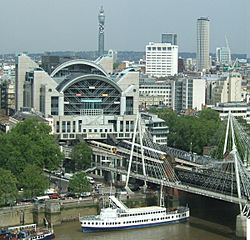 Charing Cross from the London Eye.

Charing Cross tube station is a London Underground station at Charing Cross. It has entrances in Trafalgar Square and The Strand. The station takes its name from the central London road junction of Charing Cross.

The station is served by the Northern and Bakerloo lines and provides an interchange with the National Rail network at the Charing Cross rail station. On the Northern Line it is between Embankment and Leicester Square stations on the Charing Cross branch, and on the Bakerloo Line it is between Embankment and Piccadilly Circus stations. It is in Travelcard Zone 1.

The station was served by the Jubilee Line between 1979 and 1999; acting as the southern terminus of the line during that period. For most of the history of the Underground the name Charing Cross was associated with a different station, the one now called Embankment.

All content from Kiddle encyclopedia articles (including the article images and facts) can be freely used under Attribution-ShareAlike license, unless stated otherwise. Cite this article:
Charing Cross tube station Facts for Kids. Kiddle Encyclopedia.