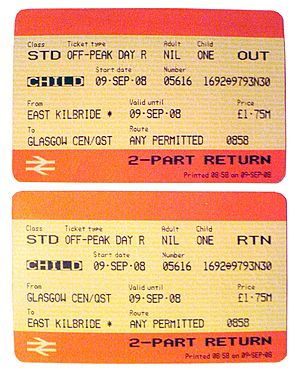 Child return ticket from East Kilbride to Glasgow
Not to be confused with Network Rail.

National Rail is a title used by the Association of Train Operating Companies. ATOC is an unincorporated association whose membership consists of the passenger train companies of Great Britain which now run the passenger services previously provided by the British Railways Board (from 1965 the Board used the title British Rail). The BRB is a statutory corporation created by the Transport Act 1962. It has since been renamed BR Residuary Ltd but has yet to be abolished.

All content from Kiddle encyclopedia articles (including the article images and facts) can be freely used under Attribution-ShareAlike license, unless stated otherwise. Cite this article:
National Rail Facts for Kids. Kiddle Encyclopedia.