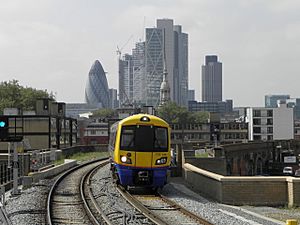 London Overground train in the City of London.

All lines can be used with the Oyster card used across London. The London Overground has received praise for its transformation of long-neglected lines into clean and reliable services, with passenger usage increasing sharply such that trains had to be extended from 3 cars in 2007 to 5 cars in 2015. In the autumn 2011 National Passenger Survey, London Overground received an overall satisfaction rating of 92%, a 7% improvement on the previous survey.

All content from Kiddle encyclopedia articles (including the article images and facts) can be freely used under Attribution-ShareAlike license, unless stated otherwise. Cite this article:
London Overground Facts for Kids. Kiddle Encyclopedia.