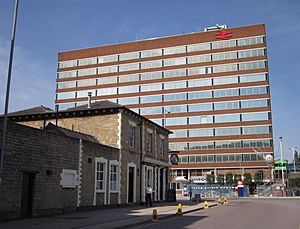 Swindon railway station is a train station in Swindon, Wiltshire, South West England. It was opened on 17 December 1840 by the Great Western Railway.

The station has services between London and Bristol. There are also trains to Cardiff.

In December 2005 people were told that stations in the Thames Valley area were to be made better.

On 1 March 2011, Philip Hammond MP, (the UK Government's Secretary of State for Transport) said that he had made plans for making the Great Western main line electric from Didcot to Swindon, and Bristol Temple Meads and Cardiff, through Bath Spa and Chippenham. The Department's reading said that new electric trains would be made by Hitatchi. The electrification had first been told by the last Labour Government's Transport Secretary, Lord Andrew Adonis..

All content from Kiddle encyclopedia articles (including the article images and facts) can be freely used under Attribution-ShareAlike license, unless stated otherwise. Cite this article:
Swindon railway station Facts for Kids. Kiddle Encyclopedia.