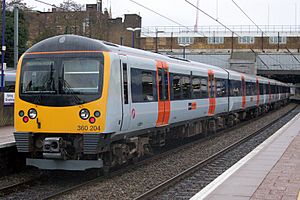 Heathrow Connect is a train operating company in London provided jointly by Heathrow Express and First Great Western, connecting Heathrow Airport with Paddington station. The service follows the same route as the non-stop Heathrow Express service but calls at certain intermediate stations, connecting several locations in west London with each other, the airport, and Central London. It runs every half-hour throughout the day and evening.

All content from Kiddle encyclopedia articles (including the article images and facts) can be freely used under Attribution-ShareAlike license, unless stated otherwise. Cite this article:
Heathrow Connect Facts for Kids. Kiddle Encyclopedia.