King's Cross St Pancras (formerly King's Cross) is a London Underground station on Euston Road in the Borough of Camden, Central London. It serves King's Cross and St Pancras main line stations in fare zone 1, and is an interchange between six Underground lines. The station was one of the first to open on the network.

The station opened in 1863 along with the Metropolitan line, catering for the Hammersmith & City and Circle lines. It was expanded in 1868 with the opening of the City Widened Lines, and the Northern and Piccadilly platforms opened in the early 20th century.

During the 1930s and 1940s, the station was restructured and partially rebuilt to cater for expanded traffic. The Victoria line connection opened in 1968.

The 1987 King's Cross fire that killed 31 people is the deadliest accident to occur on the Underground and resulted in widespread safety improvements and changes throughout the network. The station was extensively rebuilt in the early 21st century to cater for Eurostar services that moved from Waterloo to St Pancras, reopening in 2009. 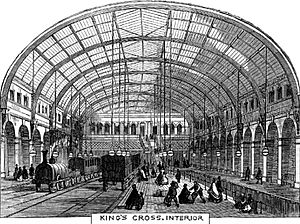 The line was opened as part of the original section of the Metropolitan Railway on 10 January 1863. In 1933 major rebuilding work took place, including a direct connection to St Pancras and a circular ticket hall. The main concourse opened on 18 June 1939, and the subway link to St Pancras opened two years later.

New platforms had been under construction as part of the station improvements that had begun in the 1930s, these were opened in an unfinished condition on 14 March 1941. The Victoria line platforms were opened on 1 December 1968. The station was refurbished in 1986. 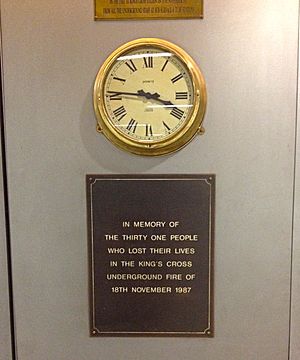 Memorial plaque with the clock to the 1987 fire

The underground network had been at risk of fire since opening, and the limited amount of space and means of escape increased the possibility of fatalities. Following a serious fire at Finsbury Park in February 1976, staff had been trained to be alert for any possible causes of ignition or smouldering.

On 18 November 1987, a passenger reported a small fire on the Northern / Piccadilly up escalator and alerted staff, the incident was judged as relatively minor. The Fire Brigade arrived with four pumps and a ladder. By this time, the ticket hall had filled with smoke, trains passed through the station without stopping, and passengers were being evacuated. 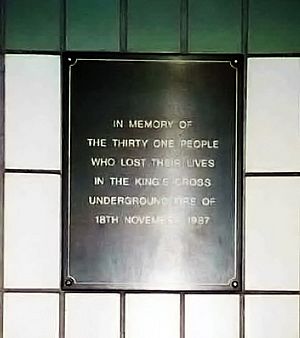 Memorial plaque to the 1987 fire in the station

A fireball erupted from the Northern / Piccadilly escalators and set the ticket hall ablaze. The fire burned for several hours and was not properly contained until the following morning. It killed 31 people, including a fire officer.

The then-unknown fire phenomenon of the trench effect made the fire develop upwards and finally caused it to explode into the station. As a result, fire safety procedures on the Underground were tightened, staff training was improved and wooden steps on escalators were replaced with metal ones.

Smoking had already been banned on subsurface areas of the Underground in February 1985; following the King's Cross fire, it was banned throughout the entire network. The fire caused extensive damage, particularly to the old wooden escalators where it had started. Repairs and rebuilding took over a year; the Northern line platforms and the escalators from the ticket hall to the Piccadilly line remained closed until 5 March 1989.

All content from Kiddle encyclopedia articles (including the article images and facts) can be freely used under Attribution-ShareAlike license, unless stated otherwise. Cite this article:
King's Cross St. Pancras tube station Facts for Kids. Kiddle Encyclopedia.