Kids Encyclopedia Facts
Not to be confused with Camden Town.

The London Borough of Camden is a London borough in Inner London. Camden Town Hall, on Euston Road, lies 1.4 mi (2.3 km) north of Charing Cross. The borough was established on 1 April 1965 from the area of the former boroughs of Hampstead, Holborn, and St Pancras — which together, prior to that date, had comprised part of the historical County of London.

The cultural and commercial land uses in the south contrasts with the bustling mixed-use districts such as Camden Town and Kentish Town in the centre and leafy residential areas around Hampstead Heath in the north. Well known attractions include The British Museum, The British Library, the famous views from Parliament Hill, the London Zoo, the BT Tower, The Roundhouse and Camden Market. In 2019 it was estimated to have a population of 270,000.

The borough was created in 1965 from the former area of the metropolitan boroughs of Hampstead, Holborn, and St Pancras, which had formed part of the County of London. The borough was named after Camden Town, which had gained its name from Charles Pratt, 1st Earl Camden in 1795. The transcribed diaries of William Copeland Astbury, recently made available, describe Camden and the surrounding areas in great detail from 1829–1848.

There are 162 English Heritage blue plaques in the borough of Camden representing the many diverse personalities that have lived there.

The area is in the northern part of the city, reaching from Holborn and Bloomsbury in the south to Hampstead Heath in the north. Neighbouring areas are the City of Westminster and the City of London to the south, Brent to the west, Barnet and Haringey to the north and Islington to the east. It covers all or part of the N1, N6, N7, N19, NW1, NW2, NW3, NW5, NW6, NW8, EC1, WC1, WC2, W1 and W9 postcode areas. It contains parts of central London.

In 1801, the civil parishes that form the modern borough were already developed and had a total population of 96,795. This continued to rise swiftly throughout the 19th century as the district became built up, reaching 270,197 in the middle of the century. When the railways arrived the rate of population growth slowed, for while many people were drawn in by new employment, others were made homeless by the new central London termini and construction of lines through the district. The population peaked at 376,500 in the 1890s, after which official efforts began to clear the overcrowded slums around St Pancras and Holborn.

After World War II, further suburban public housing was built to rehouse the many Londoners made homeless in the Blitz, and there was an exodus from London towards the new towns under the Abercrombie Plan for London (1944). As industry declined during the 1970s the population continued to decline, falling to 161,100 at the start of the 1980s. It has now begun to rise again with new housing developments on brownfield sites and the release of railway and gas work lands around Kings Cross. A 2017 study found that the eviction rate of 6 per 1,000 renting households in Camden is the lowest rate in London.

On 20 May 1999, the Camden New Journal newspaper documented 'Two Camdens' syndrome as a high-profile phenomenon differentiating the characteristics of education services in its constituencies. In 2006, Dame Julia Neuberger's book reported similar variation as a characteristic of Camden's children's health services. Her insider's view was corroboration – in addition to the 2001 "Inequalities" report by Director of Public Health Dr. Maggie Barker of "stark contrasts in" health and education opportunities – of earlier similar Audit Commission findings and a verification/update of the 1999 CNJ report.

The following table shows the ethnic group of respondents in the 2001 and 2011 census in Camden. 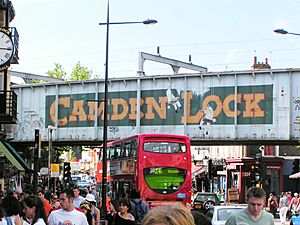 View of the railway bridge over Camden High St. which carries the North London Line 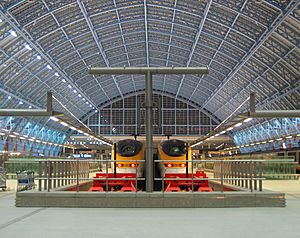 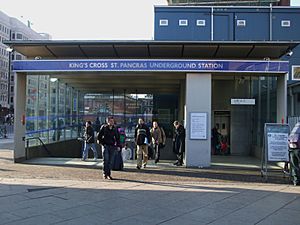 There are no motorways in the borough, and few stretches of dual carriageway road, but the borough has great strategic transport significance to London, due to presence of three of the capital's most important rail termini, which are lined up along the Euston Road.

The position of the railway termini on Euston Road, rather than in a more central position further south, is a result of the influential recommendations of the 1846 Royal Commission on Metropolitan Railway Termini that sought to protect the West End districts a short distance south of the road.

Since 14 November 2007 when St Pancras International became the new terminus of Eurostar, a major regeneration of the area has occurred with the King's Cross Central development happening behind the station.

The three major rail termini are served by two underground stations, Euston and the combined King's Cross St Pancras station. Between them, the termini are served by the Circle, Hammersmith & City, Metropolitan, Northern, Piccadilly and Victoria lines. The Central and Jubilee lines serve other parts of the borough, as will the new Elizabeth Line, when opened.

The formerly proposed Cross River Tram was going to start in the borough of Camden but was scrapped by the former Mayor of London Boris Johnson in 2008.

All bus services are operated by Transport for London. Buses serve every suburb in the borough.

From 16 December 2013, Camden Council introduced a borough-wide speed limit of 20 miles per hour (32 km/h), except on Transport for London red routes. This is to make roads safer for cyclists and pedestrians.

The borough was formed in 1965 by the merger of the metropolitan boroughs of St Pancras, Hampstead and Holborn. The first two of these had their origins in medieval Ancient Parishes of the same name, while Holborn was formed by a union of much smaller units.

The area of the old parish and borough of Hampstead in the north-west includes Belsize Park and part of Kilburn. The old parish and borough of St Pancras, which occupies most of the modern borough includes Camden Town, Kentish Town, Gospel Oak, Somers Town, King's Cross, Chalk Farm, Dartmouth Park, the core area of Fitzrovia and a part of Highgate. 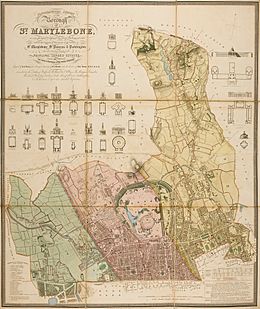 The Ancient Parishes of – west to east – Paddington and St Marylebone (in the modern City of Westminster), and St Pancras (in the modern London Borough of Camden) in 1834

In the south, the old Borough of Holborn was formed from the combined parish of Bloomsbury and St Giles, and most of the parish of Holborn (with the remaining part in the ancient Farringdon Without ward of the City of London).

The economy and land uses of the West End and other southern parts of the borough reflect their more central location. Camden has the seventh largest economy in the UK with a number of major companies headquartered in the borough; Google is in the process of completing a major headquarter building in King’s Cross. Camden Town Brewery is among the newer businesses that have thrived in the borough.

In the far south of the borough, Lincoln's Inn Fields is within 500 metres of the Thames. The northern part of the borough includes the less densely developed areas of Hampstead, Hampstead Heath and Kentish Town. There are a number of Parks and open spaces in the London Borough of Camden. Neighbouring boroughs are the City of Westminster and the City of London to the south, Brent to the west of the originally Roman Watling Street (now the A5 Road), Barnet and Haringey to the north and Islington to the east. It covers all or part of the N1, N6, N7, N19, NW1, NW2, NW3, NW5, NW6, NW8, EC1, WC1, WC2, W1 and W9 postcode areas.

For planning policy purposes, the London Plan places Camden in the 'Central London' group of boroughs.

The Borough of Camden is home to a large number of primary, secondary and tertiary institutions. Over recent years, a number of significant institutions have moved into the borough or are planning to do so. The included Central Saint Martins, the Francis Crick Institute, as well as the planned move by Moorfields Eye Hospital, recently unveiled as Project Oriel.

The London Borough of Camden is the local education authority for the borough, organised through the Children, Schools and Families directorate.

Some of London's best universities and teaching institutions are located in the Borough of Camden. They include the headquarters of the University of London, Birkbeck, part of the campus of the London School of Economics near Lincoln's Inn Fields, and Central Saint Martins.

All content from Kiddle encyclopedia articles (including the article images and facts) can be freely used under Attribution-ShareAlike license, unless stated otherwise. Cite this article:
London Borough of Camden Facts for Kids. Kiddle Encyclopedia.